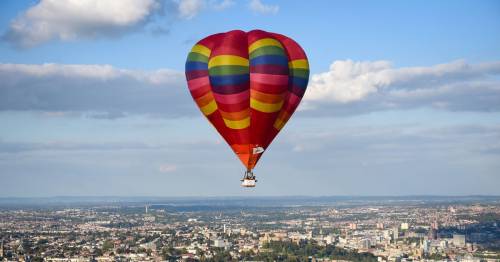 Fed-up football fans have been trying to charter a hot air balloon from Scotland to Spain to combat the soaring cost of flights.

Some Rangers fans wanting to go to Seville to enjoy the club's historic Europa League final with Eintracht Frankfurt next Wednesday have been priced out.

So they have tried to rise above the soaring cost of flying by trying to hitch a ride another way, the Daily Record reports.

Rangers followers are trying to avoid the rocketing fares to Andalucia by booking flights via Switzerland, Morocco and Norway – but some it seems have been considering other options.

The Rainbow Hot Air Balloon Team confirmed that they had received requests from three potential customers – but sadly crossing over the English channel to Spain isn't going to have lift off.

The firm stated: ”OK, everyone, we received message by three different people, asking about balloon flights over the Channel.

“We can confirm we do not fly over the Channel. If this is a joke, it is a funny one!”

One of the stumbling blocks is the fact that if the fans wanted to get to the stadium in time, they needed to set off two months ago.

Many want to be there even though the chances of seeing the game are slim.

But to get to Spain by balloon, they needed to leave in mid-March!
(

Both clubs will receive just 9,500 tickets for the match – a decision which has provoked fury in both Scotland and Germany.

Wendy Rousell, secretary of the British Balloon and Airship Club, said: ”We can only fly with the wind.

"So whilst we have a small amount of steerage, as the wind can change direction slightly at different heights, being that precise over that distance would be very difficult.

“Depending on the daytime temperature, flights may only take place in the morning and evening. The fans may miss the game.

“The balloons would also need to refuel along the way. That would be after about one hour of flight.”

She said another restriction would be size of the basket, as balloons normally carry a pilot and up to 16 passengers.

Ms Rousell added: "We would need a few balloons for the supporters. It would be an amazing sight though!

“I think it may be more practical and cheaper to fly direct by plane, but I love their thinking.

“I hope the fans are able to attend the game and best wishes to Rangers for the game! As for their balloon request……well I think that was just hot air.”

Previous : Man kills married couple and leaves them in a ‘pool of their own blood’ after fridge row
Next : Queen’s Speech to criminalise protests as Boris Johnson brings back defeated law