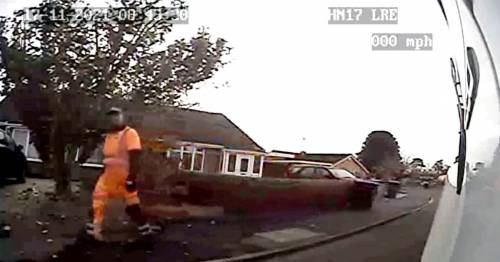 A binman was filmed narrowly escaping death after almost being ploughed down by a reckless driver.

The shocking footage, which was captured on the side camera of the bin lorry, revealed bin men collecting rubbish from homes in Alcester, Warks.

A driver in a white 4×4 proceeded to drive on the kerb and drive along the path at speed.

Just seconds later, a binman appeared at the front of the bin lorry into the path of the car.

Stratford-upon-Avon District Council released the footage as a stern warning to other drivers.

Whilst at a stop on the pavement, the car then squeezed between a driveway and the lorry before making a speedy getaway around the estate
(

A spokesperson said: "Not only puts the lives of refuse crews at risk, but also those of pedestrians.

"All collection vehicles in Stratford District are fitted with a 360-degree video camera and have regularly recorded poor, dangerous and aggressive driving and all incidents are reported to the police.

Councillor Ian Shenton, for the Wootton Wawen Ward, maintained all bin collection routes are designed to keep disruption to residents to a minimum.

He stated it was 'unfair' and 'reckless for drivers to put not only themselves at risk but others due to their impatience.

The large white 4×4 car, can be seen dangerously driving at speed, before harshly braking when they realise a binman was in the road
(

He added: "This footage recorded from the cameras is shocking, as it shows a driver putting their own impatience above the safety of our refuse crews and other pedestrians and potentially putting lives at risk.

"Drivers approaching collection vehicles are advised to slow down, stay back and look out for crew members – overtaking only if it is safe to do so."

Previous : All 19 Tory rebels who opposed Boris Johnson’s £900m raid on social care
Next : Britain’s most bizarre causes of death in 1632 – including King’s Evil and lethargy