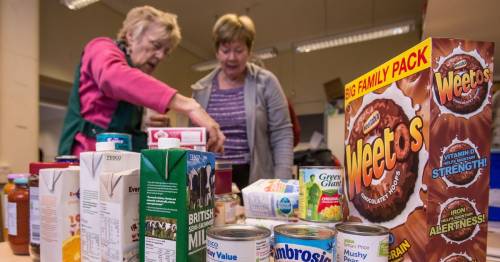 Foodbanks handed out 32 meals a minute over the past six months as hungry families struggled to feed themselves, research reveals today..

Data from Britain’s biggest foodbank network, the Trussell Trust, showed its centres handed out 935,749 emergency parcels in the six months to the end of September.

That equated to 5,141 packages a day – and volunteers are braced for demand to surge to 7,000-a-day next month as temperatures plummet and families face a “eating or heating” choice in the run-up to Christmas.

Each Trussell Trust parcel contains enough food for three meals a day for three days – meaning 8.4 million meals were distributed, or 32 a minute, between April and September.

Volunteers gave away 32 meals a minute
(

The charity says households with children were hit hardest with almost two in five parcels going to kids.

The network said demand had rocketed by 11% compared with the same period in 2019.

The need for emergency remained well above pre-pandemic levels, it added.

Trussell Trust chief executive Emma Revie said: “Everyone in the UK should be able to afford the essentials – to buy their own food and heat their homes.

"Yet foodbanks in our network continue to see more and more people facing destitution with an increase in food parcels going to children; this is not right.

“Our foodbank managers expect need to grow further still, saying they will need to provide more than 7,000 food parcels a day during December, as many families are faced with an even tougher winter ahead; this must stop.

“The answer must be for us to have the stability of a strong enough social security system to protect any one of us when we need it.

“We need government at all levels to take action and are asking the public to help fight hunger this winter and join the campaign to fight for a future without the need for foodbanks.”

The Child Poverty Action Group feared demand will surge again after the Government last month stripped six million families on Universal Credit of the £20-a-week temporary rise announced at the start of the coronavirus-1>coronavirus pandemic.

Chief executive Alison Garnham said: “No parent wants to have to rely on charity to feed their kids but the value of social security has fallen so low that the choice for many – including low earners – is eat food parcels or don’t eat at all.

“Struggle will turn to real hardship for many more this winter and beyond as prices rise and the £20 Universal Credit cut bites.

“Trussell Trust’s figures should sound an alarm – unless we restore our social security system, more children will be pushed into poverty and more families will be deprived of dignity.”

Shadow Work and Pensions Secretary Jonathan Reynolds said: “Thousands of food parcels given out every day to kids is frankly a disgrace – Britain deserves better than this.

“Conservative complacency and chaos has created a cost of living crisis with tax hikes, cuts to Universal Credit and soaring bills hammering families this winter.

“Labour would tackle the cost of living crisis through a VAT cut on energy bills to ease the burden on families this winter.”

A Government spokesman said: “We are committed to supporting people on low incomes and the changes we have made to Universal Credit will see nearly two million of the lowest paid better off by around £1,000 a year.

“The most vulnerable, including those who can’t work, can get additional help with essential costs through our new £500million support fund.”

Previous : Man climbs to top of York Minster as people are told to stay away from landmark
Next : Tories admit care cap impact on poor pensioners will only be published NEXT YEAR