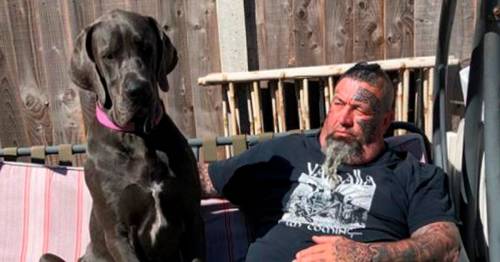 A Great Dane whose owner said he was “fit and strong” has died after a dip in the sea at an idyllic beach.

David Arthur was left “heartbroken” after his “beautiful boy” Odin, a 13-month-old Great Dane, died after swimming in polluted water.

Odin developed a lung infection and had to be put to sleep.

David had already spent around £6,000 on treating Odin’s illnesses, but the vets said the dog’s lungs were too badly damaged as a result of the pneumonia.

Odin would swim every day at Hayling Island beach, near Portsmouth, but eventually became ill because of the sewage being pumped into the water off the South coast.

He first fell ill in September, shortly before a massive public outcry about the continued pollution of water bodies in this country.

David's wife Susan with Odin as a puppy
(

After Odin’s death, Southern Water offered to pay David £500, something he described as an “insult”.

He said: "We are heartbroken. Odin was a fit and healthy dog – probably the strongest one we've had in 40 years.

"He was absolutely fit as a fiddle, lively, so full of life and in your face.

"I've got other dogs but the difference is that Odin would swim out of his depth in the sea every day. We think pollution has gone into his lung and caused an infection.

"Other dogs have got ill there. We know of one that had the same as Odin but survived because it was a small breed whereas Odin was so big his lungs couldn't cope.

"It's such a tragic, needless death and we feel there is someone responsible for it but they are obviously not going to admit that.”

Neither David nor his wife considered that the pollution could be the cause at the time of Odin’s death.

But a few weeks later they wondered whether the sewage being pumped into the sea could have affected their beloved dog.

Hayling Island beach in Hampshire where Odin would swim daily
(

He added: "We were told by vets he ingested something into his lungs which caused a major infection. After I contacted Southern Water they asked for proof it was aspiration pneumonia which I sent them.

"They said sorry for the loss of my dog and offered me £500 as a goodwill gesture which I turned down as our vets bills cost £6,000.

"I think it was an insult really, and them offering me money is admitting liability as far as I'm concerned."

Often dogs who get pneumonia have good chances of survival, but Odin’s lungs were so bad that his illness became bronchial pneumonia.

The 59-year-old road worker from Cowplain, Hampshire, said he and his hairdresser wife Susan, 69, got Odin when he was eight weeks old after having about 12 Great Dane dogs over 40 years.

A spokesman for Southern Water has said they did not accept responsibility for the dog's death and claimed the water quality on Hayling's beaches was rated "excellent".

However, in an email Mr Arthur received in October from St Peter's Vets, Petersfield, where Odin was treated, the finger was pointed at the sea as a likely cause of the infection.

It said: "During the course of his illness and treatment none of the other dogs in (Odin's) household became unwell.

"The only difference in their walks and activity is that he swam in the sea every day and the concern is that all of his symptoms could have been caused by aspirating sea water."

Meanwhile the British Veterinary Association president Justine Shotton said: "Sea water may contain bacteria even in unpolluted areas so inhalation of any foreign material, including sea water, can lead to aspiration pneumonia in dogs.

"One way that dog owners can help prevent seawater inhalation is by keeping their pets from swimming in the sea on days when it is very rough."

Odin's death comes after Southern Water was fined a record £90m last July for deliberately pouring sewage into the sea.

A number of locals and organisations had reported pollution and illness during 2021.

Hayling Island Sailing Club member and councillor for Hayling West, Joanne Thomas, said she was 'inundated' with letters from residents complaining about raw sewage in the harbours.

Kitesurfer Chris Bull, the founder of CBK Hayling Island Kitesurf School and Club, said his staff and family members often fell seriously ill after being in the water.

In June, Hayling Sewage Watch gathered more than 2,000 signatures from people calling for "help to stop Hayling beaches being polluted with untreated sewage".

Group member Mike Owens said: "We know from our own testing and the regular reports of sickness by water users that the seas around Hayling are regularly polluted by water outflows containing untreated sewage."

In October the Environment Agency warned people not to get into the water in the area due to an "abnormal situation" after residents reported sanitary products and wet wipes along the beach.

Despite this, Southern Water insisted there was "no evidence" of pollution.

Responding to Odin's case, a spokesman for Southern Water, said: "We're sorry to learn of the death of Mr Arthur's dog. The beaches around Hayling Island have among the highest quality water in the country – tested throughout the summer by the Environment Agency with results published on the Defra website.

"Some 78 of the 83 beaches in our area are 'excellent' or 'good' according to the government's classification and none are below acceptable. We understand our customers' concerns over storm releases made to prevent homes from flooding during heavy rain which is why we have launched a task force aiming to cut such storm releases by 80 per cent by 2030.

"It is impossible to say how Odin caught pneumonia but as a goodwill gesture we offered to pay £500 of vet fees as we always go above and beyond for our customers."