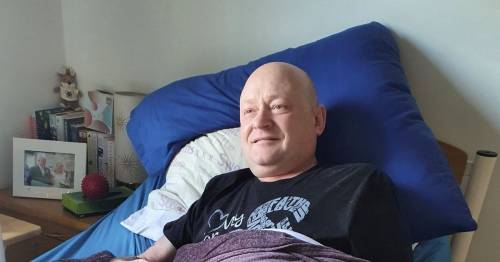 A 'fit and healthy' man whose numb hand turned out to be an aggressive form of cancer has sadly died after battling the disease for almost two years.

Steve Dixon, 59, was told he may have had a stroke when he complained about tingling in his left hand but was left devastated when doctors discovered he had brain cancer.

The grandfather-of-three was diagnosed with a glioblastoma multiforme (GMB), an aggressive type of cancer that can occur in the brain or spinal cord, in March 2019.

The keen golfer had two brain surgeries and cancer treatment to try to keep the tumour at bay but eventually his treatment options ran out.

Sadly, he died on January 9 this year surrounded by his loved ones, including Milo the dog, who howled and cried as Steve slipped away.

Steve's widow Jane said she was left devastated as their dog wouldn't even walk into their room for weeks after his passing. 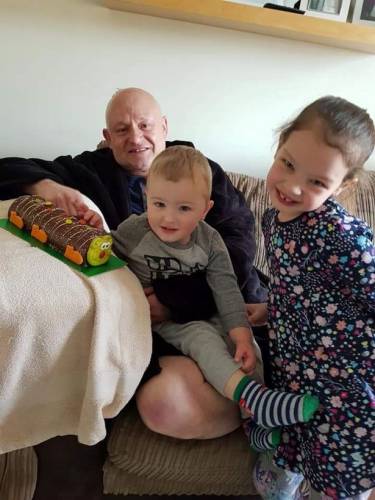 Steve's widow has been raising money and awareness of the disease since his tragic passing
(Image: Brain Tumour Research / SWNS)

Jane, from Baildon, near Bradford, West Yorkshire, said: "Steve was a fit and healthy man, who loved nothing more than a game of football or a round of golf.

"He didn't smoke and only drank socially. He was the picture of good health.

"But this disease is indiscriminate".

Jane said that Steve noticed he was lacking co-ordination in his left hand in March 2019, before the symptoms escalated 'very suddenly'.

His doctor believed he may have suffered from a stroke, but a CT scan revealed a 'mass' on his brain.

Steve was sent for a more detailed MRI scan, which confirmed a brain tumour.

Four days later, he had a craniotomy at Leeds General Hospital (LGI), to debulk the tumour.

Jane added: "He was so brave and never complained about anything.

"He did really well with his cancer treatment, sailing through it with barely any side effects."

The besotted couple married in August that year on a 'lovely hot summer's day' with around 80 guests.

Jane said she was glad they were able to do so before Steve became ill again.

After finishing his treatment, Steve bounced back and stayed well for a year or so but in March 2020, a routine scan revealed tumour progression.

In August 2020, he got referred to the palliative care team and with their support, Jane cared for him at home.

Heartbroken by her loss, Jane has channelled her grief into fundraising to help find a cure for brain tumours.

Brain tumours kill more children and adults under the age of 40 than any other cancer yet historically just one percent of the national spend on cancer research has been allocated to this devastating disease.

Last year, she did a raffle to raise money for Brain Tumour Research and a collection at Steve's funeral raised £561.

Jane added: "I have also set up a direct debit to make a regular donation to help this worthy cause.

"Through my own tragic experience, I became all too aware of the terrible statistics surrounding brain tumours.

"But I want to do all I can to help ensure other families are not torn apart by a brain tumour diagnosis."