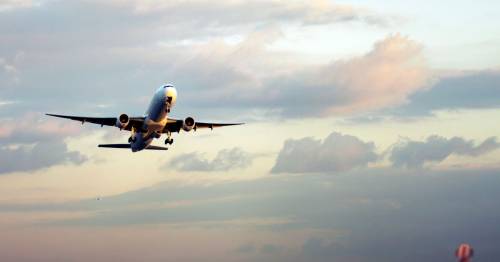 A new-zero emissions flight across the Atlantic could take off next year, the Government claimed today.

Such a sortie would “usher in a new era of guilt-free flying in the coming decades”, according to the Department for Transport.

The plane would be powered by 100% sustainable aviation fuel (SAF) and is expected to take to the skies in 2023.

Speaking on a trip to the US, Transport Secretary Grant Shapps said tonight: “This trailblazing net-zero emissions flight – a world first – will demonstrate the vital role that sustainable aviation fuel can play in decarbonising aviation in line with our ambitious net-zero targets.

“That’s not just great news for the environment, it’s great news for passengers who will be able to visit the Big Apple without increasing damaging greenhouse gas emissions.

“It’s crucial that we place sustainability at the heart of the aviation industry’s recovery from Covid-19 and I look forward to working with them on this challenge, which will lower the impact flying across the Atlantic has on the planet."

The fuel is made from waste materials such as household waste or used cooking oil and offers greenhouse gas emissions savings of more than 70% compared to kerosene jet fuel.

Combined with “greenhouse gas removals, 100% SAF will enable the delivery of a net zero flight”, the Government said.

Estimates suggest a British SAF sector could support up to 5,200 UK jobs, with annual turnover hitting £2.3billion by 2040.

Airlines UK chief executive Tim Alderslade said: “UK airlines strongly support the development of a UK SAF industry, which will play a vital role in helping our sector deliver net-zero emissions by 2050, as we are committed to doing.”

Warren East, chief executive of aircraft engine maker Rolls-Royce, said: “This is an exciting and ambitious challenge which Rolls-Royce is ready to support, having successfully tested our large commercial aero engines on 100% sustainable aviation fuel over the last year.

“We have the technology to help the UK Government achieve its objectives and we look forward to working closely with them to deliver this milestone transatlantic flight.

“Just over 100 years ago, Rolls-Royce powered the first ever transatlantic flight and now we have the innovation and expertise to power the next generation of sustainable aircraft.”