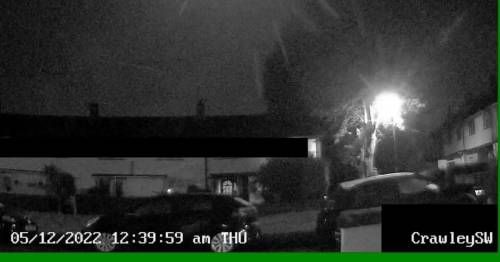 A clip of an incredible “fireball” meteor flying through the sky has been described as being like “someone setting off a white flare”.

The meteor was spotted in several places around the UK, with one man in St Albans, Hertfordshire, having seen it at around 12.40am this morning.

Another witness, in South Wales, said he saw it, describing the phenomenon as like "someone setting off a white flare beside me."

A third man, Chris Chadfield, was lucky enough to catch the fireball on CCTV from Crawley, West Sussex, The Star reports.

Astronomer Will Gater wrote: "Chris Chadfield caught the fireball on camera! Looks just as I saw it.

The meteor was likened to a 'fireball' and a 'white flare'
(

"Another bright meteor fireball over the UK last night at 23:40UT."

In January, people across the UK reported seeing a flaming meteor light up the sky – as shocked spectators stood in awe of the spectacle.

Spectators saw the blue and green flaming rock over large parts of Scotland, as well as parts of England, and Wales.

But reports of something strange in the sky come from as far as the Netherlands.

After shooting across the sky the meteor eventually burned up in the earth’s atmosphere before its debris crashed to the ground.

One onlooker told the Daily Record: "It appeared from nowhere and travelled at speed, losing altitude as it passed."

While stargazers in North Wales told North Wales Live: "It was going so fast we questioned ourselves. I’m so glad you posted this. I no longer feel like I was seeing things!"

Previous : Mum wants to rehome daughter’s puppy because ‘it’s too much work’
Next : Civil servants’ union chief blasts Tories and Jacob Rees-Mogg for ‘going to war’