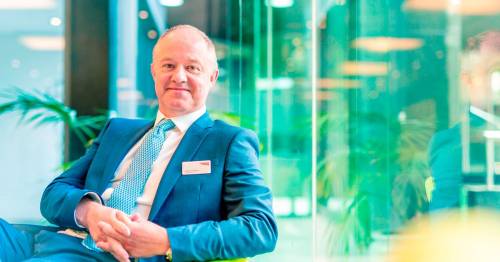 While millions of workers struggle with the cost of living crisis, Britain’s fatcat bosses have never had it so good.

Top executives at firms facing industrial action are taking up to 86 times the average pay of some staff.

But while Boris Johnson boasts about wanting a high-wage society, the PM yesterday insisted staff asking for pay rises to make ends meet would raise inflation, which yesterday hit a 40-year high of 9.1%.

The High Pay Centre think-tank’s Andrew Speke said: “People across the board can see the cost of living go up while those at the top are still doing very well indeed.”

Matthew Gregory – FirstGroup chief executive got £840,000 in pay and perks last year – around 25 times what the RMT says its average members get

And as train staff prepare for the second of three national strikes, we can lay bare the yawning pay gap between other bosses and workers, who have had average wage rises of 4.2%.

The firm is facing its first national strike in 35 years in a pay row.

At Royal Mail, 115,000 workers are being balloted on strike action over wages. Boss Simon Thompson got 23 times more than the average postie.

Workers are voting on industrial action and the result should be known this week.

Stagecoach Group boss Martin Griffiths coins in 32 times more than his workers, some of whom are due to strike from next week.

Inflation is showing no signs of slowing down

A report from the High Pay Centre last month found the pay gap between top bosses and workers had ballooned as the country emerged from Covid.

Of 69 big firms which released data in the first three months of this year, executives earned 63 times more than their staff.

That compared to 34 times in the early part of last year.

But stubborn Mr Johnson yesterday dug in his heels on wages, despite the soaring salaries of company chiefs and rocketing costs of food and fuel.

He ­indicated the pay of 5.5million public sector workers will rise by less than inflation.

The cost of living squeeze is worsening

The PM’s spokesman said a bigger raise would “chase inflation with wages, push inflation up further, making the hike ­worthless”.

But experts said most of today’s ­sky-high living costs are due to a global surge in energy, oil and other commodities.

Ahead of the second rail strike, RMT chief Mick Lynch yesterday accused Grant Shapps of “wrecking” talks aimed at ending the dispute. The Transport Secretary insisted that was “a lie”.

Labour leader Keir Starmer blasted Mr Johnson for failing to “lift a finger” to stop the strikes, despite finding time to attend a lavish Tory fundraiser dinner this week.