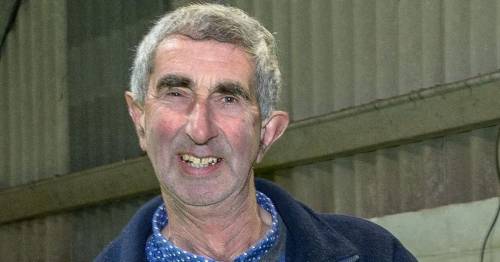 Farmer, 71, dies in horror ‘cow attack’ as heartbroken family speak of their devastation

A "well-liked and well-respected" farmer died in a horror cow attack as his heartbroken family pay tribute.

Derek Roan, 71, was attacked by a cow at Barnbarroch Farm, near Colvend, Scotland, it's understood.

The farmer was a popular figure within the community, and was described as having a "special talent" for bringing people together as chairman of the local council.

The Scots granddad was rushed to the Dumfries and Galloway Royal Infirmary following the horror incident on Sunday but sadly died a short time after.

His loved ones confirmed his death in a moving statement issued via the family firm Roan's Dairy, the Daily Record reports.

His family has been milking pedigree Holstein cows at Barnbarroch for six generations.

The Stewartry farmer was a popular figure within the community, and was described as having a 'special talent' for bringing people together as chairman of the local council
(

They said: "It is with deepest sadness to announce the tragic death of Derek Roan at Barnbarroch Farm, beloved husband to Kathleen, devoted father to Stuart, Steven, Leeanne, father in law to Aylett, Tracey and Tony and proud Papa to Fergus, Fraser, Andrew, Lucy, Daisy and Skye.

“We are totally devastated and still in shock at what has happened and it will take some time for us to come to terms of not having him around.

“All Derek's hard work was for his two passions in life – his family and his farms.

“Derek was well known within the farming community and many other circles. He will be sadly missed by all.

“We would like to thank everyone for sending their condolences during this difficult time for us.”

As chairman of Colvend and Southwick Community Council, Mr Roan played a huge part in local life and was commended for the impact he had.

Vice-chairman and friend Simon Pain said: “This is an absolute tragedy for all concerned. All I know is that it was a stock-related injury on the farm itself.

“Derek was well-liked and well-respected in our community.”

Mr Pain paid tribute to Mr Roan’s special talent for bringing people together for the benefit of everyone, adding: "I think Derek transformed the role of the community council within the community.

“He made it much more active and helped develop a whole series of projects for the good of the community.

“He played a leading role in building the new recreation ground behind Colvend Primary School.

“And he led the way in community involvement, getting people together and moving people to help one another.

“That was especially important during the pandemic,

“A large part of all that was down to Derek’s leadership.”

Mr Pain continued: “Derek was a leading light on our community council for a number of years, most of those as chairman, and in the Church of Scotland at Colvend.

“He was also an active member of the local curling club – he was involved in all sorts of things.

“Please convey the community’s best wishes and condolences to the family.”

A statement from Police Scotland said: “On Monday, 20 June 2022, we were made aware of the death of a 71-year-old man in Dumfries and Galloway Royal Infirmary.

"The death is not being treated as suspicious and a report has been submitted to the Procurator Fiscal."

Previous : Sweden attack: Multiple people injured as man goes on knife rampage at shopping mall – World News
Next : Summer Solstice 2022 – what does it mean, as 6,000 flock to Stonehenge