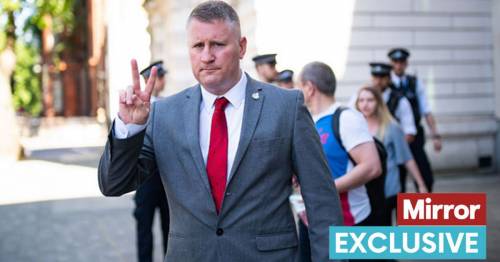 A far right group described as “one of the most active” in the UK is putting up a candidate in this week’s Wakefield by-election.

Ashlea Simon, who is standing for Britain First, has allegedly said: “English people can’t be black.”

Other racist messages have been posted on social media by former and present members.

Some of those involved with the group have long criminal histories, including convictions for violence.

He shouted “Britain first” during the gun and knife attack, despite having no apparent links to the group.

Ashlea Simon is the party chairman for Britain First

Anti-extremist group Hope Not Hate says in a report that Britain First has recently opened a “training centre” for its own defence force.

Ms Simon, who joined Britain First in 2019, stood in the local elections in Salford in May, coming second with 508 votes.

She describes herself as a nationalist and has promoted the theory that white Europeans are being replaced by immigrants.

A message from her account on encrypted messaging service Telegram in 2020 said: “White people are being erased, defend your people and your homelands before you become a hated minority.”

Another message in the same year said: “English people can’t be black, English blood is white.”

Ms Simon told the Mirror her account must have been hacked.

She added: “That comment is fake. I have never said anything like that, having three black god-children.”

Britain First, formed in 2011, has over 20,000 subscribers to its Telegram channel and has a headquarters in Manchester.

Despite having just 100 estimated committed activists, the group has stood in elections across the country.

At points, Mr Golding or his group have denied Russian involvement in the Salisbury poisonings and defended state persecution of Russian opposition figure Alexei Navalny.

"Mr Golding was convicted under terrorism law in 2020 after refusing police access to his phone on his return from Moscow. Ms Simon joined him on one of his trips to Russia.

Britain First says it “rejects racial hatred in all its forms”, but messages from its activists and supporters reveal shocking views.

"Haven’t seen one Black competitor and therefore zero whinging Negroes crying into their fried chicken that they’ve been racially abused.”

Joe Mulhall, of Hope Not Hate, told the Mirror: “While Britain First does not have a huge membership, it is one of the best equipped and active far right groups in the UK.

"Britain First is working hard to spread its hatred on a grassroots level, as activists are out on a weekly basis in our communities, leafleting, running recruitment drives and generally spreading their vitriol through whatever means possible.

“In 2022, it is sad to think a group like Britain First, which openly spreads racist hatred, is standing for election.

“Within the far right, there has been a shift towards whitewashing extreme ideologies, but the activists at Britain First barely make an effort to hide their racist and xenophobic views.”

Mr Golding told the Mirror he was “under no suspicion whatsoever of anything relating to terrorism” and that “police have no right to pick people out at random and use anti-terrorism legislation to try and raid their phones”.

He claimed that Geoff Miles had already been expelled by the party.

Mr Golding added: “I have never met Putin. I have praised Putin before for certain things… [However] we do not support military action between fellow Europeans, full stop.”

Brendan Cox, husband of murdered Jo Cox, said: “Britain First is a bunch of desperate attention seekers pretending to be a political party.

"They’ll spew their hatred but be ignored by the good people of Wakefield.”

Previous : Top warning signs for potentially deadly heatstroke that can make your heart swell
Next : ‘The Tories have gone on strike – head to the bar, comrades!’ – Fleet Street Fox