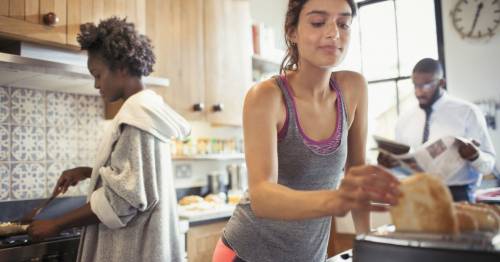 With her gleaming home, millions of Instagram followers turn to Mrs Hinch for the latest cleaning tips.

Influencer Sophie Hinchcliffe has become a cleaning sensation after sharing her cheap and easy tricks to keep your house super-clean.

The mum-of-two has even authored a series of books designed to help those who struggle to stay on top of keeping their home spick and span.

Now her fans have created their own Facebook group dedicated to swapping cleaning and tidying tips.

On it, a woman shared a photo of her grim toaster which had rust stains and burnt-on food on the stainless steel.

She asked the group: “Best thing to remove this on top of a toaster?”

The cheap cleaning product sorts out any toaster
(

The post was inundated with comments, with many suggesting she uses Pink Stuff paste, which is an absolute bargain.

A third said: “Pink Stuff and a brillo pad.”

A fourth added: “The Pink Stuff paste and a dry Scrub Daddy.

“Recommended by someone on here, had both the items so gave it a go. Worked a treat.”

Another wrote: “Pink Stuff/Cif cream and a non-scratch scrubber.”

“Pink Stuff paste, two minutes and then wipe off.”

Luckily, the woman who asked confirmed that Pink Stuff did the trick, adding: "Pink stuff worked a treat, thank you!”

Other popular suggestions included Cif cream while others recommended tin foil and ketchup.

One person suggested: “Cif cream cleaner! Put the toaster on first, so that the metal is at least warm when you put the cream on, unplug the toaster, and clean with Cif as per instructions – worked really well for me!”

"Tinfoil and tomato sauce worked for me – it’s like new again," wrote another.