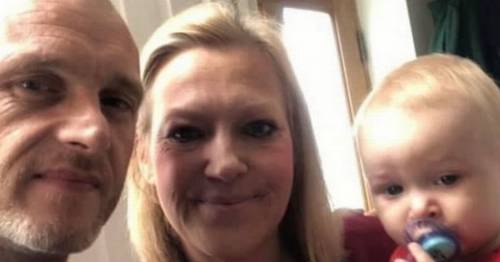 Andrew Ward, 38, passed away suddenly in the early hours of October 4 – leaving his family heartbroken at how "unfair and cruel” life had been to him and his wife, who had been trying for a baby for six years

Family friend Michala Marling said: “Everybody has been hit hard, but nobody more than Donna and his mum.”

She also paid tribute to Andy, as he was known by his loved ones: “He was the most incredible father, husband and friend.

“He had so much love to give. No matter what he was going through he always had a smile.”

Andrew Ward and his wife Donna
(

Michala said you could tell how kind he was by the way he treated passengers when working as a bus driver, once locking his bus and running down the street to collect the shopping of a distressed, elderly customer, who had forgotten it at the previous bus stop.

“I wish they could just get a break, it is bad things continually happening to good people,” she added.

Andrew leaves behind his wife and their 16-month-old son, and Mason, 18, his son from a previous relationship.

Now, Michala has launched a gofundme to support Andy’s family.

Andrew Ward with Leo, his 16-month-old son, and Mason, 18, his son from a previous relationship
(

She says Donna is out of work after she struggled to secure part-time hours when her baby was born, as well as currently receiving physiotherapy after not fully recovering from giving birth.

“Donna is often in quite a lot of pain so she’s got that to contend with,” Michala explained.

All money raised will go towards Andy’s funeral and any other unexpected costs faced by the family.

Michala said: “There’s nothing to take away the heartbreak but we can take away the financial burden, that’s the thought behind it, so she can process what has happened and focus on looking after Leo.”

“We want to give [Andy] a really good send off,” she added.