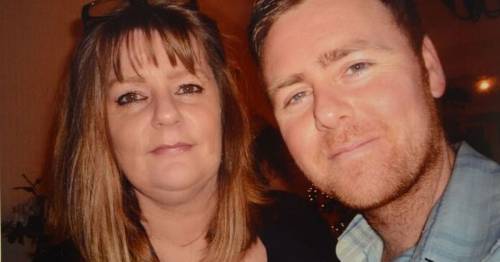 Family pleaded for their mum to get sectioned before she was found dead, inquest hears

A family asked for their mum to be 'sectioned' multiple times after her three suicide attempts just weeks before she went missing, an inquest has heard.

They made the pleas after she had attempted to take her own life three times, South Manchester coroner's court heard.

The mum from Hale disappeared on December 18, 2017, the Manchester Evening News reports.

Her leg was later found in the River Irwell in Salford some 11 months later, with her remains tragically discovered in the Mersey Marsh, near Frodsham, in December 2019.

James says Marie first attempted to take her life on December 3, 2017, after being found at home, but had been discharged just 24 hours later, with doctors allegedly saying she was 'just being silly'.

"I could not believe she was being discharged," James said in court.

"She tried to take her own life yesterday. The psychiatrist said he thought she was just being silly."

Marie's mental health began to deteriorate at the end of October 2017 following the passing of her mum, Irene, who would visit her daughter 'four or five times' a week.

"It did not initially affect her," said James, who was married to his childhood sweetheart for 40 years.

The first signs that Marie was not well came a few days after the loss of Irene, after her husband discovered her when it 'was apparent she had been drinking' on a Saturday morning – which was very out of character, he added.

Then, on November 30, the self-employed ironing businesswoman rang eldest son Stuart to ask for 'sleeping tablets' and 'anti-anxiety medication'.

That led her to seeing her GP, Dr Patel, who prescribed her anti-depressants and sleeping tablets.

However, her out-of-character behaviour continued.

Marie's actions had alarmed the family

On December 3, instead of seeing her brother and sister-in-law for coffee as she did most weekends, Marie did not arrive at their home – and instead returned back to her house after 'drinking'.

When dad James came back after looking in the shops for her, she was 'fast asleep' on the settee – but he became alarmed when she had not stirred for 'six hours'.

That prompted the family to call for an ambulance, who took her to Wythenshawe Hospital.

"She was very drowsy and non-responsive," Stuart explained. During the visit, paramedics were 'speaking to her but she was not talking back, she was completely out of it', James added.

Despite her admittance and overnight stay at Wythenshawe Hospital, the family felt more could have been done to care for Marie.

"I went on December 4 thinking I was going to visit," James continued during his testimony in the court. "They said she had been declared medically fit and she was in with a psychiatrist.

"I could not believe she was being discharged. She tried to take her own life yesterday.

"The psychiatrist said he thought she was just being silly."

When asked why the family thought doctors felt she was fit to leave their care, they said it was because Marie was a good 'actress'.

Marie's sons and her husband Jim

The next time Marie's actions raised the alarm was on December 8.

After James had been working away for the morning, he returned to find Marie had vanished from home.

That sparked a search effort from the family across Hale and other places they knew the mother was likely to know.

Eventually, Marie was found by a dog walker in a pond in Sunbank Wood, in Hale, with cuts to her wrists and legs.

Again, she was taken to Wythenshawe Hospital, where she stayed until December 12.

During her stay, the family again asked the doctors to section his mum.

"I would always ask the nurse if they were going to let her out," Stuart said. "They said 'not a chance'.

"They had a security guard at the end of the bed."

James added: "I expressed how serious this was. I said the family want her sectioned and that she needs to be on long-term medication.

"The doctor said she does not need that. He said she would be better served by the home team.

"I said this has all happened within five days from being released to a far more serious attempt."

Stuart, giving evidence alongside his dad, said the news of his mum's discharge took a heavy toll on him.

"It destroyed me," he said. "She stabbed herself and nearly drowned. What more warning signs do you need?"

Although home visits were arranged for Marie, only two appointments took place before her final out-of-character incident.

After Stuart's partner Roxanne had stayed with her at the family home on December 17, Marie dashed out the door – with Roxanne following her.

After she could not find her on foot, Roxanne turned to see Marie driving a car.

Eventually, Roxanne managed to get Marie out of the car and call the police.

When Stuart arrived at the scene, he asked the attending police officer: "Please section my mum.

"We were banging our heads against a brick wall. We asked three of four times. We were really scared."

For a third time, Marie was not sectioned, and instead saw another psychiatrist the following day.

After both Marie and James arrived back from the appointment, at around 11.30am, he went out to run some errands, and left Marie to start work.

Tragically, that would be the final time he saw his wife alive.

The inquest then heard that Marie left home in the early afternoon, boarding a bus to Altrincham station, where she took a tram to Deansgate.

She then proceeded to walk around the Bridgewater Canal area of the city for some time, before buying some items, including alcohol, from a Sainsbury's store.

After this, she boarded another tram to Victoria Station, and then asked a taxi driver to take to Heaton Park and then The Rock shopping centre in Bury.

Police Senior Investigating Officer DI Simon Aker then said Marie was last spotted on CCTV walking towards Openshaw Park, at around 3:15pm – roughly the same time the family alerted the police to her disappearance.

That was the last confirmed sighting or Marie, with pathologists believing that the most likely cause of death was a sudden movement of the head towards the chest, breaking her neck.

The inquest continues, with a verdict expected on Friday.

* Samaritans (116 123) operates a 24-hour service available every day of the year. If you prefer to write down how you’re feeling, or if you’re worried about being overheard on the phone, you can email Samaritans at jo@samaritans.org

Previous : How fleeting choices, circumstances doomed 17 in Bronx fire
Next : Trucker killed three in ‘fireball’ crash as he surfed adult sites while driving