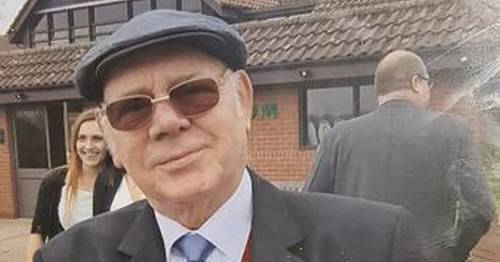 Family of ‘drunk’ grandad who died after stairs fall sues Wetherspoons for £150,000

A family is suing Wetherspoons for more than £150,000 after a drunk grandad died more than two years after falling over a stair rail during a boozy stag do.

Brian McAlister, 74, died on New Year's Day 2018 from the life-changing injuries he had sustained in April 2016 when he fell eight feet from the stairs at Norwich's The Queen of Iceni pub, landing on his head.

Mr McAlister, of Suffolk, was "intoxicated" as he made his way to the toilet when he lost his balance, suffered "catastrophic" injuries and was left confined to a wheelchair – ultimately dying due to the impact of paralysis.

His family, led by daughter Pamela Suttle, are now suing JD Wetherspoon Ltd for more than £150,000, blaming the "unusual design" of the pub's staircase for his death.

The "unsafe" layout of the staircase meant that it was more likely that someone who fell on the steps would fall over the bannister, her lawyers claim in the High Court action.

Having fallen over the side, Mr McAlister landed on his head, sustaining a skull fracture
(

However, the pub chain denies any responsibility and says Mr McAlister was himself to blame for what happened, having drunk so much he needed alcohol detoxification medication afterwards.

Writing in documents filed at the London court, the family's barrister Elizabeth-Anne Gumbel QC said Mr McAlister had been on his way to the toilet, which was on an upper floor, when he fell.

"As can be seen from the available CCTV footage, he slid down the stair rail and fell over the balustrade at a distance of 2.6 metres, falling on his head and suffering catastrophic injuries," she says.

"His fall and consequent injuries leading ultimately to his death were caused by the unsafe design of the staircase that was unsafe for a public house.

The staircase of the pub in Norwich
(

The staircase had later been criticised in an environmental health report in October 2016, she says, pointing out that its design provided a risk of a serious fall to pubgoers.

"A person who falls on the stairs at the Queen of Iceni is more likely to hit the handrail because it cuts across the direction in which a person falling is likely to travel," said the report.

"The staircase was of such an unusual design that customers attending for the first time would not appreciate the increased risk when climbing the stairs."

Having fallen over the side, Mr McAlister landed on his head, sustaining a skull fracture and devastating spinal injuries, which required gruelling surgery, but which led to his death in 2018.

Angela Suttle, daughter of Brian, is blaming the "unusual design" of the pub's staircase for his death
(

But for Wetherspoon, barrister Jonathan Payne claims that the fall was an "unforeseeable" tragedy caused by a "freak set of circumstances" which were unconnected to the staircase design.

He says Mr McAlister was the worse for drink when he came to grief, claiming he "used the staircase at a time when he was intoxicated to the extent that he was unsteady on his feet".

"The deceased was intoxicated to the extent that he required alcohol detoxification medication," he added.

He said the stairs would have been trodden by "many millions of customers" in the 15 years since the pub started trading.

Norwich's The Queen of Icini pub
(

He added: "Save for one customer who chose to jump voluntarily from the staircase, there have been no reported similar accidents."

Mr McAlister may have toppled backwards after suddenly fainting, he added, and then spun round as he fell, sending him onto and then over the rail.

"It is denied that the staircase had an unsafe design either as claimed or at all. The staircase complied with all relevant building regulations," he says.

"It appears from the evidence collated after this unfortunate incident that at the material time the deceased was engaged on a stag party and was intoxicated.

"When the deceased ascended the staircase he appeared to be unstable and tripped up the first landing, albeit he regained his footing.

"This was not a normal or foreseeable use of the staircase. It represented a freak set of circumstances."

The case reached court last week for a brief hearing ahead of a full trial of the claim at a later date.

Previous : Prince William’s stunned first reaction at seeing glam first portrait of him and Kate
Next : Crafty students’ sneaky trick to plunder week’s worth of pizza from Gordan Ramsay