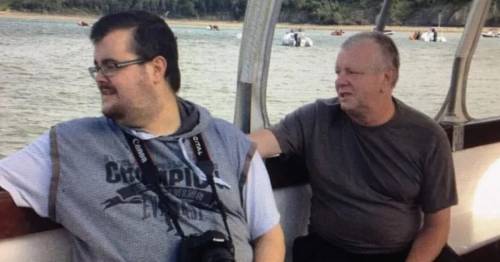 A family discovered secret recordings of their son who died in a double family tragedy.

Lee Herbert, 42, died in his sleep on April 1 followed by his father Pete Herbert, 66, who died three weeks later.

The Co-Op worker, from Cardigan in Wales, was described as a gifted singer but was too shy to perform in public.

But following his death, his family discovered that he had secretly recorded thousands of cover songs on the karaoke app Smule.

"We've always known Lee had a truly amazing voice but because he was so shy and quiet the only place I could ever get to sing with him was in the car," his sister Katie Herbert told Wales Online.

"He would help out in the local theatre group with the tech and the lights, but he wouldn't sing in front of people.

"He was a very artistic guy who could really harmonise, yet he was so unassuming. No-one ever had a bad word to say about Lee. He was a very caring person and was always there if needed.

"After he died we went onto the app and found more than 1,400 recordings of him singing. It was lovely to find that. I spoke to my brother George and he agreed we really must have Lee singing at his own funeral."

Several of Lee's recordings were played at his funeral in Narberth Crematorium.

This included covers of Bring Him Home from Les Misérables, Wherever I Lay My Hat by Paul Young and You Raise Me Up by Josh Groban.

"When he's singing You Raise Me Up, which has some very difficult parts, he's just sitting on a chair at his computer desk belting it out. It was so effortless to him," Katie said.

"It was a very intense funeral because two of the songs were actual videos of him singing. It was lovely, but hard to watch at the same time."

The mum-of-four also opened up about how the family might never know why Lee died.

Then three weeks and three days later, their dad Pete also died without warning after he collapsed in Katie's bathroom.

Paramedics administered CPR but he died despite their efforts to save him.

"I knew he'd gone, but I didn't want to give up. The ambulance service were brilliant when they got to us and got his pulse back for seven minutes but he re-arrested three times," she said.

"In my mind I think he just died of a broken heart. Losing Lee really affected him. You never expect to lose your child."

Katie described Pete, who also had four grandchildren, as an incredibly popular man who had a great sense of humour.

"We couldn't go on holiday without bumping into someone he knew. He was the funniest guy – whenever we'd walk into a room all the attention would be on him," she added.

"He ran pubs, he worked in the media industry so he knew a lot of celebrities, and he played football semi-professionally.

"Everybody loved Dad. The world seems so much quieter without him in it because he was such a big character."

The family has set up a GoFundMe page in order to try and cover the costs of both funerals.

"We hadn't even been invoiced for the first funeral when we had to ring them again to book the second," Katie added.

"We wanted to give them the best send-off possible, but it was difficult."