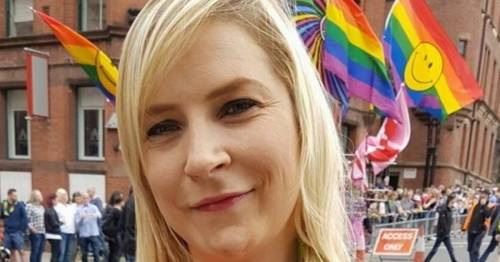 Family in emotional tribute to ‘beautiful’ woman, 35, who died in police cell

A family has paid tribute to a "beautiful" woman who died in a cell after a retired police officer was found guilty of gross misconduct.

Kelly Hartigan-Burns, 35, was arrested over the alleged assault of her partner in Darwen, Lancashire, on December 3, 2016.

At 00.19am the next day, she arrived at Greenbank police station in Blackburn, where she was later found unresponsive in a cell.

She was later taken to hospital, where she was found dead, Lancs Live reports.

Her mum said Kelly would have been "right as rain" if she had received proper treatment.

A hearing has taken place into the conduct of retired police custody sergeant Jason Marsden, who was on shift at the police station at the time of the incident.

Police failed to assist the woman properly after she was arrested, a panel heard
(

At the police station custody desk, Sgt Marsden engaged with Ms Hartigan-Burns for 4 minutes and 17 seconds, the panel said.

Once she had been taken to a cell without CCTV or constant observation, he continued working for another 40 minutes or so and finished his shift just before 1am.

Police records stated that Ms Hartigan-Burns was moved to the cell at 00.23am and then roused in the cell at 1.01am. She was to be checked every 30 minutes.

She was later found in an unresponsive state at 1.30am, given CPR treatment, and taken by ambulance to Blackburn Hospital – where she was pronounced dead.

Overnight, there were six custody sergeants on duty at Greenbank operating over two shifts plus other detention officers, the disciplinary panel said.

Three custody sergeants were officially on a shift until 3am, however, under a local arrangement, they took turns to leave at 1am.

Jason Marsden and one other sergeant were due to leave early that night.

In his first interview connected to the disciplinary hearing, Mr Marsden described that night's shift as an "average busy night", the panel said.

Under interview, the retired sergeant said Ms Hartigan-Burns was aggressive, intoxicated, and incapable of understanding custody and legal procedure talks when she arrived under arrest.

He also believed she could become physically violent so she was quickly sent to a cell.

The panel heard that initial police station custody desk conversations with detainees can last anything from a few seconds to 20 or 30 minutes, depending on various circumstances such as the detained person's behaviour and if violence is felt to be likely.

Mr Marsden denied the police misconduct charges. He did not attend the disciplinary hearing in person but was represented by a lawyer.

He said he had completed a number of assessments, given hand-over information and had made plans to continue some incomplete tasks regarding Ms Hartigan-Burns in the morning.

Kelly Hartigan-Burns was arrested on December 3, 2016
(

However, on Monday the police disciplinary panel reached a finding of gross misconduct against Mr Marsden.

It said he had breached numerous procedures, policies and codes of conduct in the detention and risk assessment of Ms Hartigan-Burns.

The panel said he had "lost control" and aggravated the situation – which diminished his authority and damaged his ability to do his job.

He had also breached a duty of respect and courtesy to Ms Hartigan-Burns, in the abrupt way he spoke to her and in not explaining detention procedures.

The disciplinary panel found that he failed to properly assess the risks she faced despite suicide warnings on police records and Ms Hartigan-Burns being intoxicated as well as having prescription medication for mental health problems amongst her possessions.

Mr Marsden also failed to contact a medical expert for professional opinion soon after she was detained, the panel said.

He also deliberately bypassed questions on a police computer system designed to fully assess risks, welfare and observation levels needed for each detainee.

He inserted full stops and used other tactics to navigate the computer system rather than enter detailed answers which would likely have raised the observation level and other safety requirements needed for Ms Hartigan-Burns, the panel said.

Mr Marsden's lawyer, Sarah Barlow, said he had shown remorse for the events and his health had suffered.

His conduct on the night had not been thought-through or thought-out.

He had a 27-year career with the police with a commendation and no previous disciplinary issues. This was an isolated incident.

He retired from Lancashire Constabulary in August 2021 a few weeks after being notified of the disciplinary proceedings.

A coroner's inquest is expected in Blackburn in early 2022.

The woman's cause of death was not discussed in detail at the police disciplinary hearing.

Previous : Bike helmet saves man’s life after 10ft wall collapses and traps him near his home
Next : England should have axed Rory Burns and Haseeb Hameed for the Ashes, claims David Lloyd