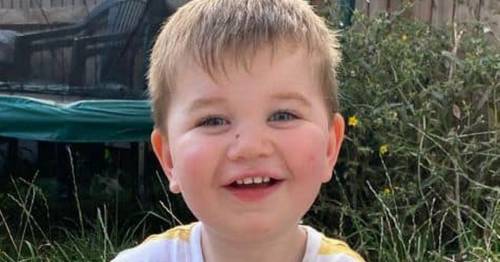 Family heartbroken as boy, 2, with ‘most beautiful smile’ dies suddenly in his sleep

A two-year-old who died suddenly in his sleep has been described as "the happiest boy you'll ever meet".

Emergency service workers were unable to revive Arlo Canter after he was found unresponsive on Saturday morning, November 20, at home in Cardiff.

It is understood the tot died without warning in the night, although the exact nature of his death remains unclear, Wales Online reported.

Arlo's mum Kirsty Houston, dad Cameron Canter, and his three-year-old brother Teddy have been left to grieve his sudden loss.

Writing on social media, mum Kirsty said: "Myself and Cameron are absolutely heartbroken to say that Friday night we lost our beautiful baby boy Arlo.

"As you can imagine we are all broken right now and we know we have so much support and love around us.

"He had the most beautiful smile that would light up the room and we are so proud of the amazing boy he was.

"There are no words to describe the pain we feel now, but together we are trying to be strong to support Teddy through this hard time."

Devastated dad Cameron said Arlo had not suffered with any major health issues in his short life, apart from mild asthma.

He said his son had been his normal, happy self only hours before he died.

"He was dancing and having catches with me," Cameron continued.

"Whenever you looked at him he would just smile, and his blue eyes would light up the room.

"Personally, I still can't believe it's happened. I feel like I need to pick him up from nursery."

Two GoFundMe pages have been set up to raise money for the family's funeral costs, one of which has already amassed a total of £7,300.

They can be found here and here.

"I could not be more proud of this community. I'm gobsmacked at how much money has been raised at such short notice," Cameron added.