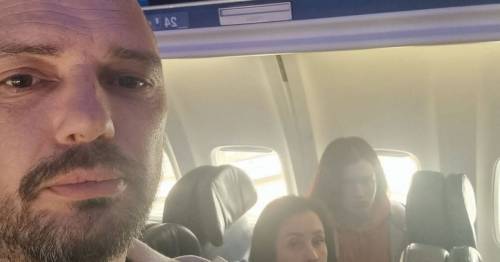 A dad has slammed the airline TUI, after his family holiday was left in ruins by four separate flight cancellations in 48 hours – forcing them to abandon the trip altogether.

Ian McStein, 43, from Runcorn, Cheshire, had excitedly arrived at Manchester Airport on May 29, ready to jet off for fortnight in the Greek island of Crete, Liverpool Echo reports.

But instead of setting off for the sun – his family were thrown headfirst into the travel chaos and endured a hellish two days of constant cancellations, including being escorted off one plane by police officers.

Despite arriving four hours early for their original flight, Ian claims they were told to come back the next day after a horrendous wait and last minute cancellation.

Less than 24 hours later the battle continued when the dad said they even managed to get to the point of being sat on the runway for two more planes which were halted, before they were stood ready to board a fourth when they received a text saying there weren't enough seats.

Speaking to Liverpool Echo, he said: “The first plane we couldn’t fly on, don’t know why.

“The second plane we couldn’t fly on, it didn’t have bottled water.

"And then next, we sat on the runway for three-and-a-half hours.

“The pilot didn’t have enough air time, enough flying hours. This was 2am or 3am in the morning.

"We’re waiting to get through security, it took two hours.

“In the end the police had to come, not to calm us down, no-one was kicking off, it was broken (to us) by the police – there were no TUI reps whatsoever apart from the police – they told us our flight time was the next day at 12.45pm.

“We got there at 9am. TUI passengers had a special gate to go and check in.

“We were all pretty happy to be fair that we had a special gate, we all got through check-in and security pretty fast, went down to the gate.

“Most of the passengers went down to the gate, we were all made up. We were flying on a TUI Dreamliner.

“It was 45 minutes before boarding, 16 passengers got a text message to say ‘we are really sorry for the disruption to your journey, the aircraft is smaller than originally scheduled, which resulted in us having to remove some of our customers from today’s flight. We are sorry to confirm you are one of these’.”

TUI has since apologised to passengers for the chaos
(

With no TUI reps available Ian said he asked to speak to a manager who insisted the plane was too small.

Ian claims the staff member “went red in the face” when he said how many spare seats the flight had.

Ian said: “He went red in the face and said ‘there’s been a mess up here’.

"We got cancelled because there ‘wasn’t enough room’ on that plane.

TUI boss Andrew Flintham has since apologised to customers who were caught up in the May half-term holiday chaos, claiming the company experienced "capacity issues".

A spokeswoman for the company said: “We would like to apologise to Mr McStein and his family.

“The aircraft originally scheduled for flight TOM2744 from Manchester to Heraklion on Sunday, May 29, was changed at the last minute due to operational issues, impacting a small number of customers.

“We contacted everyone as soon as we became aware of the change, offering the option to cancel their holiday for a full refund.

“We understand how frustrating and disappointing this will have been and are very sorry for the inconvenience caused.”

On The Beach, the booking provider which the family used to purchase the holiday was also approached for comment.

An On The Beach spokesperson said: "We're sorry to hear about Mr McStein's experience following the late cancellation of his TUI flight.

"We have spoken to Mr McStein and we have offered him a full refund in line with EU regulations."

Previous : Why is Tiger Woods not playing at the US Open after making remarkable comeback?
Next : Boris Johnson’s ex slams ‘petulant’ Prince William over ‘petty royal squabbles’