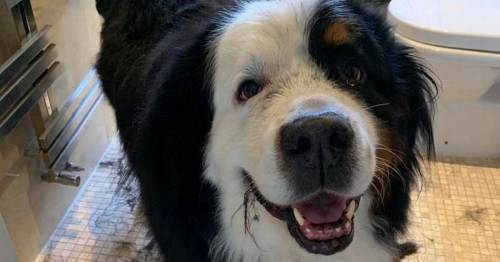 A family were devastated to find their dog had collapsed and died on a sweltering day just hours after they left the animal with a pet sitter.

Andrea Brown says the sitter took the family's two Bernese Mountain dogs for a walk into Gloucester in the West Country on Friday, as the country was experiencing a heatwave.

However, she claims the sitter did not have permission to do so.

One of the dogs, Banjo, collapsed while apparently in the back of a car and died soon after, GloucestershireLive reports.

Andrea had left the dogs and the sitter at 4pm and was told by the vets at 8pm – before she had a chance to see Banjo – that he was dead.

Andrea, from Kingsholm in Gloucester, is appealing to the public to come forward with any information they may have as the dog sitter was not permitted to take the animals out for a walk, especially as it was such a hot day.

She had found the sitter on an agency website and has used them on and off for several months.

Banjo (right) with his brother Bisto
(

Andrea said: “I have had Banjo and his brother since they were pups, and both are seven years old, but I have kept Bernese Mountain dogs for years.

Andrea and her family were away for the weekend. The dog sitter was employed to go to the family home to let the dogs out as agreed.

Andrea said: “I had never given permission for the sitter to take my dogs out. We had got ready to leave the house at 4pm and by 8pm Banjo was dead.

“The dog sitter had called me all in a panic to say Banjo has collapsed. I asked where they were and I was told in town.

“I could not believe what I was hearing and asked why they walked the dogs into town and they said to me they had taken the dogs in a car into town. I heard nothing then until the vets called me to tell me my dog was dead.”

The family gathered up their things quickly and rushed back home. Now they want to find out what happened to their beloved animal in those four hours.

Andrea said: “The dog sitter was meant to let the dogs in and out throughout the day. They had a lovely day having their doggy ice creams in the shade of the garden and then came in to have a lie down on the lovely cool tiles in the kitchen with the oscillating fan going.

“The dog sitter was meant to come in around 8pm to let them out so I do not even know why they were out with my dogs in the first place. The dogs are really big and friendly and people want to come up to them and see them."

She said people may have noticed the dogs and could offer some more information to help her work out what exactly happened.

“I want to know what happened to my dog and where they had gone. We had only seen him four hours before and then when we saw him next he was dead on the vets table.

“The vets told us when they got to the car to get Banjo out, the car was like a sauna. He was dead when he got there."