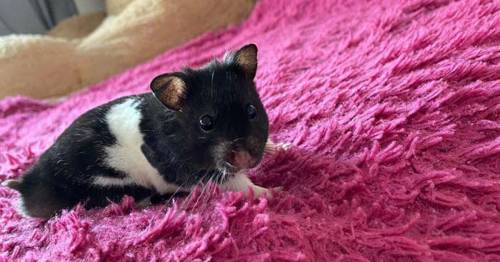 A pet hamster thought to have been eaten by a family dog has returned home – 17 months after it disappeared.

Elspeth Gold, 43, had given up on ever seeing Pablo again after he vanished from her home in South Lanarkshire in June 2020.

She had suspected that her nine-year-old springer spaniel, Lucy, had eaten the two-year-old rodent when it suddenly went missing.

Months passed and, when there was still no sign of Pablo, Elspeth decided to get rid of his cage, reports the Daily Record.

But she was shocked when the "rough" looking hamster appeared back in the family home "as if nothing happened" earlier this month.

Later on that night, Elspeth took to Facebook to tell others about Pablo's return and ask if anyone had a cage she could borrow.

“So after being missing for a year and a half, Pablo the hamster has turned up.

“Anybody out there got a spare cage I could have please?”

Dozens of social media users commented on the post after being amazed by the news.

Lorna MacKenzie said: “No way Elspeth. This is unreal. How has it survived as long lol?”

Elspeth had to scramble to find a new cage for Pablo

Gillian Love said: “Pablo was quieter than a mouse for months.”

Speaking on Monday, Elspeth, from Larkhall, said: “My daughter got a hamster for her 12th birthday.

"She had him for nearly a year and he went missing, she was devastated.

“I blamed the dog for eating him.

“So fast forward to Monday the 1st of November, 17 months later, my daughter was in the kitchen about 10 o'clock at night and Pablo rocked up as if nothing had happened, looking a bit rough.

“So after putting out an SOS on my Facebook, we got him a cage.

"We had him for a total of nine days and after that he became unwell and died, we couldn’t believe it.

“I have never known a hamster to be missing for that long and be found alive.”

Previous : Drug linked to hundreds of deaths being sold to homeless addicts for just 50p a pill
Next : Glaus gets second straight start