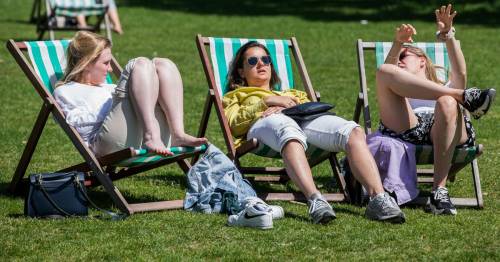 Brits are set to sizzle in 23C heat today, but the warm temperatures will not last long.

Today is likely to be the warmest day of the week after blue skies and sunshine dominated over the weekend.

The sunny spells will likely come to an end on Wednesday but it will be fairly warm, the Met Office said.

Brits across the country will face unsettled conditions for the rest of the week before the mercury starts climbing again.

Richard Miles, Met Office forecaster, told The Mirror: "Today it'll stay warm in the South East and could reach 23C in some places.

"There is heavy rain in the north and that will move down so most places will see these showers and those temperatures will cool down, but it won't get cold."

He added: "Get your barbecuing done if you're in the South, that's going to be your last chance for a couple of days."

He said: "People should be sensible, using sunscreen, but the majority of people today are not going to see blazing sunshine. More like sunny breaks than extended clear skies.

"You should always take precautions for the effects of ultraviolet, you can still get it even though hazy and cloudy conditions."

He said temperatures could still reach 20C on Wednesday.

He added: "On Wednesday there are bands of showers in the South West and that is where it will be concentrated, but there is still uncertainty about how far north it will come.

It will mainly affect the South West. There is a lot of uncertainty as the unsettled conditions will bring us into the weekend."

Mr Miles added that there is a low-pressure system in the Atlantic that could determine how warm it will be next week.

He said: "There is potential for warmer air to be drawn early next week, which might bring warm temperatures to the south.

"It really depends on what happens in the Atlantic over the next few days and what the low-pressure system there does.

"If it's directing a bit further East we are more likely to get wetter and unsettled conditions, but the general trend is warming next week and you could be looking at the mid to high 20s.

"The south will be the warmest and again it depends how this plume of warm air is directed more over the South West or South East.

"The warming will start from Monday and at the moment it looks like these sort of conditions will sort dominate in bringing in fine and dry weather at least until late, mid-May so about a week or so".

Previous : ‘Lying Boris Johnson is a liability and Keir Starmer’s fate is in the police’s hands’ – Kevin Maguire
Next : Queen is still planning to attend State Opening of Parliament despite mobility issues