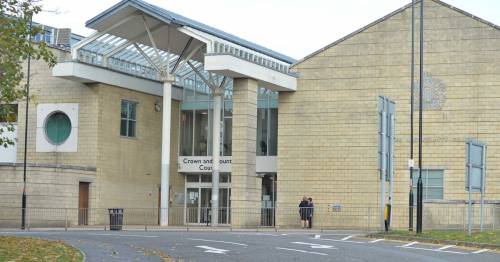 An evil mum and dad who beat their children with sticks and belts as punishment for getting bad grades at school have been jailed.

The couple and a third family member, who cannot be named to protect the anonymity of their victims, subjected five kids to a campaign of violence between 2015 and 2019.

A court heard they would regularly beat the children with sticks, belts and even shoes whenever they misbehaved.

The cruel parents, who had "high expectations" educationally for their kids, would also chastise them in the same way if they underachieved at school.

They were caught when one of the children disclosed his parents had been violent towards him and a third female family member had also joined in.

The trio went on trial at Northampton Crown Court and was found guilty of a string of child cruelty, neglect and assault offences on November 5.

The three adults were jailed at Northampton Crown Court
(

The court was told how the five children suffered regular beatings and often in front of one another and it happened so frequently they considered it normal.

The mother of four of the children was jailed for four years while their father was sentenced to three and a half years in prison.

The third family member, who is the mother of the fifth child, was also caged for three and a half years.

Detective Sergeant Laura Jardine, of Northamptonshire Police, said afterwards: "This is a very sad and upsetting case in which these three parents have wrongly used force to chastise their children.

"These children were slapped and hit with sticks, belts and shoes over a significant period of time.

"It was heard in court that the reason behind their actions was that all three parents had high expectations of their children and wanted them to achieve well educationally.

"However, it was also apparent that these beatings were given as punishments if the children were deemed to have misbehaved.

"Sadly this abuse became so commonplace the children believed it was normal.

"They suffered a great deal over many years, and now also have to deal with the fact their parents have – rightly, given the seriousness of their crimes – been sent to prison.

"These five children have been tremendously brave in coming forwards and giving evidence against their parents.

"I very much hope that they are all able to move past the trauma of their experiences and go on to lead happy and successful lives."

All of the children involved are now in the care of social services.