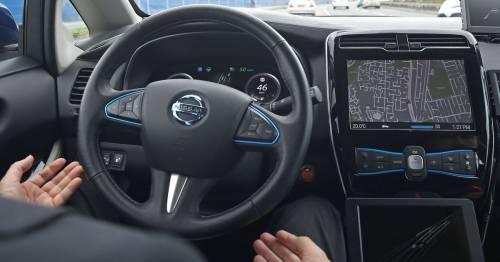 Motorists with self-driving cars can watch films behind the wheel under draft Highway Code changes unveiled today – but there are a list of other rules these drivers will have to stick to as well.

The government today announced plans for the rules motorists will have to obey once self-driving cars are approved for UK roads.

Self-driving cars are meant to help reduce accidents by reducing human error. The Department for Transport said human error is responsible for 88% of crashes on UK roads.

However, the cars will not be fully automated, which means a confusing list of rules about what motorists can and can't do – and when.

The plans come ahead of full regulations that will be introduced in 2025 and as it stands, there are no vehicles approved for self-driving in Britain.

Here is everything we know so far about how the rules will work for motorists with self-driving cars.

1) If the car crashes, it is not your fault

Provided the car is in self-driving mode, if the vehicle is involved in an accident it is not the owner's fault.

Instead, insurance companies will be liable.

2) Drivers can watch films behind the wheel

Changes to the Highway Code will allow drivers to binge their favourite boxsets, watch a new film and surf the web in self-driving cars.

Under new rules, as long as drivers keep in a single lane and below 37mph, motorists in autonomous vehicles could watch TV or the latest movies while they drive.

But this will only be allowed if drivers watch films on built-in screens, not separate devices like laptops and phones.

This is because in the event of an emergency, on a built-in screen the film will cut out and the driver will be alerted.

Even if the car is in control, it will be illegal to use a phone behind the wheel.

The government said: "It will, however, still be illegal to use mobile phones in self-driving mode, given the greater risk they pose in distracting drivers as shown in research."

4) You have to stay in the driving seat

Even if the car is driving, you have to remain in the driver's seat.

This is because you may have to take control at short notice.

The Department for Transport said one Brit the rules were tested on was bamboozled by this, thinking they were even allowed to change seats and go to sleep while the car took over.

Just like driving a normal car, if you are in a self-driving vehicle you have to be under the drink drive limits and not be under the influence of drugs.

6) You will still need MOTs, tax and insurance

Self-driving cars will still need to be kept up to date with safety checks and insurance just like other vehicles.

Owners of self-driving cars might not be criminally liable if the vehicles make mistakes – meaning drivers will not pay fines like speeding tickets.

The government's legal advisers, the Law Commission, have suggested law changes making drivers immune from prosecution or fines if their robot car makes a mistake.

Currently, if the owner is driving the car then any errors are their fault.

The proposed new laws would mean mistakes made by a car driving itself are not the owner's fault.

Instead, the car maker or designer of the self-driving car software will be responsible.

The government said today insurers will be responsible, but it is still considering the Law Commission's proposals.

Either way, drivers would not be liable if their car makes a mistake.

Previous : NHL off-ice official injured during Game 3 of series between Boston Bruins and Carolina Hurricanes
Next : One pub shuts every two hours as more closures likely due to staffing and supply issues