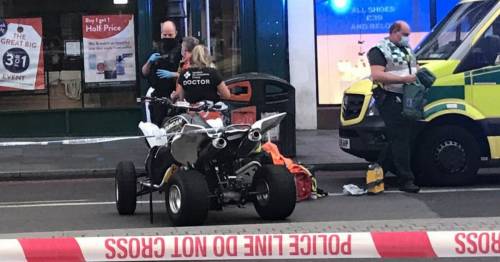 Evening of violence in London as man stabbed to death and woman, 19, slashed with knife

A man has died following a stabbing near Brixton Underground Station in south London, the Metropolitan Police said.

Officers were called to the scene at around 8.18pm on Wednesday to reports of an assault and found a man aged in his early 20s suffering from a stab wound.

Paramedics from the London Ambulance Service and London Air Ambulance attended but were unable to save the man, who was pronounced dead at around 8.45pm.

His next of kin has been informed and are being supported by officers. Formal identification has not yet taken place.

The Met said a man was arrested nearby on suspicion of causing grievous bodily harm.

A crime scene remains in place and inquiries continue.

Hours earlier in Bexley the force said officers rushed to the high street to find a girl, aged 19, had been slashed with a knife.

The Met said they had been informed of the incident by the ambulance service on Wednesday afternoon.

A statement said: "Officers attended the scene and found a 19-year-old woman with slash wounds.

"At this stage, her injuries are not believed to be life-threatening.

"Enquiries are ongoing and no arrests have been made."

Previous : Terrified pensioner forced to stay up all night next to door which wouldn’t close
Next : Norway marks ten years since Breivik’s deadly attacks