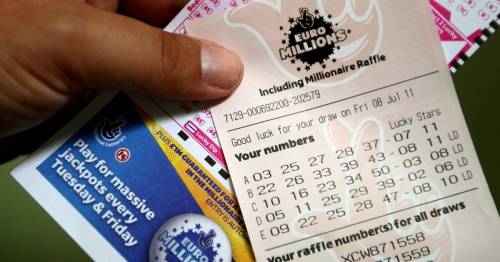 Tonight's whopping £45million EuroMillions lotto jackpot draw with the National Lottery could change a lucky winner's life forever – so have your numbers come in?

The humungous prize would mean you would never have to work another day in your life.

Neither would any of your family or friends if you were in a generous mood – but have you started your weekend in serious style with an enormous win?

Have you numbers come up tonight?
(

Whether it's a new country estate, a life-supply of holidays to far-flung corners of the globe, or simply paying off any pesky bills or debts – tonight's jackpot could make dreams come true.

For those who don't like the pressure of putting luck in the hands of the kid's birthday or anniversary dates, there is always the Lucky Dip, where they numbers are chosen at random for you.

You also get an automatic UK Millionaire Maker entry with every line of numbers you play.

Somebody's life could be about to change this evening
(

EuroMillions draws take place every Tuesday and Friday. The deadline for ticket purchases on draw days is 7.30pm.

As well as the UK, the game is offered to players in Andorra, Austria, Belgium, France, Ireland, the Isle of Man, Liechtenstein, Luxembourg, Monaco, Portugal, Spain, and Switzerland.

They have been changing lives for over 25 years.

It is more than ten years since a huge UK winner.

Not your day today?

Saturday's "must-win" Lotto jackpot now stands at a cool £12m after nobody won the big prize in the midweek draw.

Around £30 million is raised every single week by National Lottery players for good causes.

Previous : ‘Infuriated’ Charles and William said Prince Andrew had ‘run out of road’ in legal fight
Next : Avatar robot goes to school for ill German boy