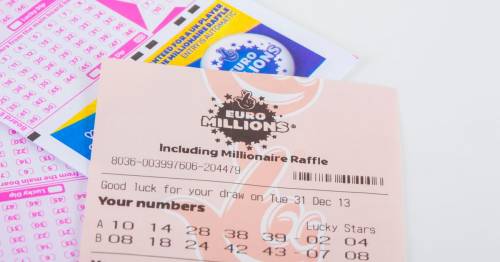 Camelot's Andy Carter, senior winners' adviser at The National Lottery, said, "What an amazing night for one UK ticket-holder who has scooped the incredible £184 million EuroMillions jackpot – they have become the UK's biggest ever National Lottery winner.

"Players are urged to check their tickets and give us a call if they think they are tonight's lucky winner."

The £184million mega-prize could make the lucky winner richer than a number of famous faces, including the Prince of…Darkness.

The win dwarfs the estimated £150m Black Sabbath rocker Ozzy Osbourne and wife Sharon are worth.

An anonymous winner currently holds the title after scooping a massive £170m in October 2019.

Andy Carter, senior winners’ advisor at The National Lottery, said: “This massive amount could not only change a winners’ life, but would make a huge difference to their friends, family and community.”

If no-one had matched the five numbers and two lucky stars tonight, the money would have rolled over to almost £197m on Friday.

Mr Carter added earlier today: “My team and I have our fingers crossed for all UK players and are on standby.

“Make sure you grab your ticket early.”

Some UK winners have turned their plans into a reality after scooping the top prize in previous draws.

The married couple are worth £150million
(

Another winner, who became similarly stinking rich on the Euromillions, landed in hot water with her husband for obliterating her charity donations budget.

Frances Connolly, 55, from Hartlepool in Co Durham, won £115million but has already given away half on charitable causes.

In 2022 alone, she donated £11million to help others – roughly what she agreed to donate over 10 years.

The ex-teacher told The Mirror last month: “I get to change people’s lives. I’m addicted to it.”

She said: “I get to change people’s lives every day if I want to. Helping other people and doing something to help other people will lift you.

“If you can give to others, whether it’s time or money, it’s really important, it gives you a buzz. It’s addictive. I’m addicted to it now.”

According to Camelot, cash raised from UK tickets also goes to help "supporting the most vulnerable in society, and helping to make inspirational Olympic and Paralympic champions".

To date over £45billion has been raised by Brit players – which feeds into funding "660,000 projects" from the arts and charities, to heritage and health.

Their site reads: "That’s the equivalent of over 235 lottery grants in every UK postcode district, with every project making a real difference to the lives of people and communities across the UK – especially as 70% of grants are for £10,000 or less."