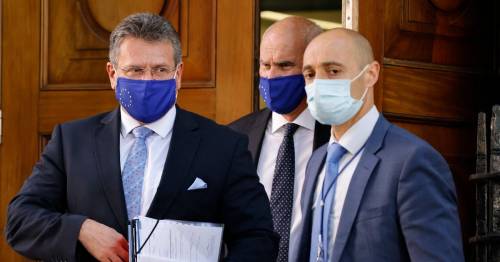 The EU has threatened to launch a trade war against Britain if it fails to bring in checks on chilled meats entering Northern Ireland.

The UK has threatened to illegally extend a grace period on chilled mince, sausages and chicken nuggets across the Irish Sea beyond the end of June without the EU's permission.

The post-Brexit deal struck by Mr Johnson has angered unionists, who object to barriers to trade with the British mainland, and fuelled fears over rising sectarian tensions.

But Boris Johnson said he was "very optimistic" the impasse could be resolved and it was "easily doable" – although he did not say how.

"What we want to do is make sure that we can have a solution that protects the peace process, but also guarantees the economic and territorial integrity of the whole United Kingdom," he said.

Brexit minister Lord Frost accused the EU of adopting an "extremely purist" approach to the Northern Ireland Protocol signed up to by the PM to prevent a hard border.

He insisted there is still time to reach an agreement before the current grace period for chilled meats ends but the UK will consider "all options" if it proves impossible.

A senior UK source added: "The PM has been pretty clear that he can't see a reason why we shouldn't be able to sell the British banger in Northern Ireland."

Another claimed: "Nobody wants to get into a trade war or anything close to it."

After the talks, Mr Sefcovic insisted the EU has shown "enormous patience" in the face of "numerous and fundamental gaps" in the UK's implementation of the deal.
"We are at a crossroads means that our patience really is wearing very, very thin, and therefore we have to assess all options we have at our disposal," he said.

The top EU official warned that tariffs – taxes on imports – could be imposed if that happens, including on the financial services sector and trade.

The issue threatens to overshadow the G7 summit where Joe Biden will warn Mr Johnson not to "imperil" the Northern Ireland peace process.

His national security adviser Jake Sullivan revealed the US President, who has Irish ancestry, harbours "very deep" concerns on the fall-out of Brexit.

He said Mr Biden believed the Northern Ireland protocol was "critical" to protecting peace in the province.
EU diplomats believe that Mr Biden is their “best tool in the armoury” to get a breakthrough in the row over border checks.