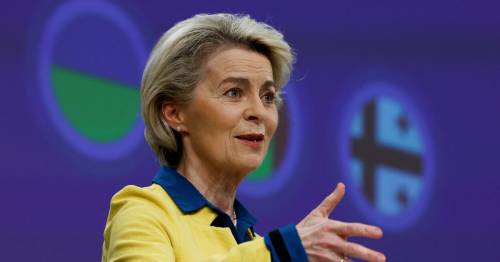 The European Union's executive arm has recommended that Ukraine be granted candidate status to join the 27-nation bloc, as Vladimir Putin's war continues to unite Europe.

The promise of membership in a union created to safeguard peace holds deep symbolism for the nation at war, but it is only the first step in a process that could take decades.

The European Commission recommendation is the first step on the long road toward membership and comes a day after four European Union leaders vowed to back Kyiv’s candidacy.

"Ukraine has clearly demonstrated the country's aspiration and the country's determination to live up to European values and standards," the EU's executive Commission head Ursula von der Leyen said in Brussels.

She made the announcement wearing Ukrainian colours, a yellow blazer over a blue shirt.

Leaders of EU countries are expected to endorse the decision at a summit next week. The leaders of the three biggest – Germany, France and Italy – had signalled their solidarity on Thursday by visiting Kyiv, along with the president of Romania.

The war has increased pressure on EU governments to fast-track Ukraine’s candidate status, but the process is expected to take years, and EU members remain divided over how quickly and fully to open their arms to new members.

Ukraine will still face a lengthy process to achieve the standards required for membership, and there are other candidates in the waiting room. Nor is membership guaranteed – talks have been stalled for years with Turkey, officially a candidate since 1999.

But launching the candidacy process, a move that would have seemed unthinkable just months ago, amounts to a shift on par with the decision in the 1990s to welcome the ex-Communist countries of Eastern Europe.

"Precisely because of the bravery of the Ukrainians, Europe can create a new history of freedom, and finally remove the grey zone in Eastern Europe between the EU and Russia," President Zelensky said in his nightly video address.

"Ukraine has come close to the EU, closer than any time since independence," he said, mentioning unspecified "good news" to come.

If admitted, Ukraine would be the EU's largest country by area and its fifth most populous. All three hopefuls are far poorer than any existing EU members, with per capita output around half that of the poorest, Bulgaria.

Previous : Mum, 36, with ‘everything to live for’ found dead outside pub with hypothermia
Next : Boris Johnson warned refusal to appoint ethics chief would be ‘big mistake’