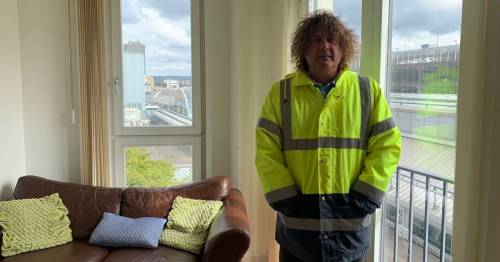 A man has been left furious after his flat has proven "impossible to sell".

The St David's shopping centre apartments in Cardiff were built as part of the 2007/2008 retail development of the area.

Anyone would think a flat in this location would be expensive, but one flat owner trying to sell his property says it is "impossible to sell".

After putting the flat on the market he says he was shown the building's External Wall System Fire Review certificate – or more commonly known as an EWS1.

The certificate for the building shows a B2 rating because inspectors found that "an adequate standard of safety is not achieved" in a building's external wall system.

It means combustible materials are present and remedial works are required.

As a result of this rating, lenders will only facilitate lending when there is a "cost and funded remediation plan with committed dates for starting and finishing all specified/required work".

Chris says this means his flat is effectively "unsellable".

Chris says his flat is 'unsellable'
(

The construction worker says the situation he has had to deal with is "unbelievable".

He says has been in a battle with Landsec, who owns the building, since February, demanding clarification on the building's EWS1 certificate and any planned works to satisfy the requirements.

Amid changing government standards, Landsec has now conducted another assessment into the external wall system – but is still yet to update leaseholders on their findings.

Landsec apologies to Chris and others, but have also said there are no life-safety concerns across the entire block of flats.

He said: "It’s just incredible that this is happening here.

Chris is furious that his flat has become 'impossible' to sell
(

"Here we are above the busiest shopping centre in Wales. If we were somewhere way out of the city, it may not be as remarkable.

"But it’s unbelievable when it’s above a flagship shopping centre like St David’s, where thousands of people go every week.

"I couldn't believe it when I found out about the B2 rating, it is really shocking. I'm not an expert in these matters, but when I was told about it, I did some research and realised that with that rating, I was very unlikely to get a mortgage.

"I'm wanting to sell this flat, but instead, I'm being told it's essentially worthless."

He said the lack of action to try to resolve the issue has been "appalling".

Chris added: "Landsec is sitting around doing nothing in my opinion. It's not just an issue that affects me, either.

"It applies to everything that's sat above St David's 2, and that is an awful lot of property because, for one single building, this is absolutely huge."

Despite Landsec's assurances that there are no risks to residents' safety, but Chris can't help but feel concerned by the initial survey's findings that an "adequate level of safety" was not achieved at the time of the inspection.

He said: "You saw how many people died in Grenfell, people want assurances that this building is safe."

A spokesperson for Landsec told The Mirror: "The safety and wellbeing of our residents is our primary concern and we have always prioritised this across all our operations. We have worked hard to see where we can go further in demonstrating the safety performance of our buildings so that our residents can be confident in the building and their homes. We are continuing to work hard and at pace to make further progress in securing appropriate certifications and reassurances.

“We have been in regular contact with our residents via our appointed agents to ensure they are informed about the investigations we have undertaken at The Hayes, which have been numerous and detailed. These investigations include comprehensive fire risk assessments, which have consistently confirmed that there are no life safety concerns at The Hayes, a conclusion that has been further endorsed by independent fire safety engineers.

"It’s important to note that the EWS1 process is there to support the financial industry to make a judgement on whether to lend against specific properties – it does not look at the fire safety of an entire building as the comprehensive risk assessment does. We are also working closely with the building’s original contractor to determine any additional surveys or remediation works that may (or may not) be needed in light of the Government’s new code of practice. We have always sought to promote and uphold the very highest building safety standards across the industry, and we are one of the first companies of our kind to be engaging Government actively on the building safety pledge.

"We know that this has been a difficult time for some leaseholders and apologise for any frustration they feel over the time this is taking. We expect to have further updates for residents at The Hayes in the coming weeks.”

Previous : Victoria Tentler-Krylov’s “Sidewalk Connoisseurs”
Next : Unlucky puppy ‘feeling sad’ after adopters let him down on his birthday