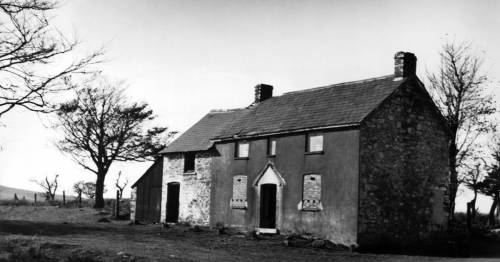 The village of Mynydd Epynt was home to a thriving community of farmers whose ancestors had cared for the land for hundreds of years.

More than 200 people lived in the area, in Powys in Wales, which was made up of 54 farms.

Then one day, the farms suddenly lay empty.

Homes were abandoned, livestock vanished and buildings were eventually torn down.

In late December 1939, residents were issued with eviction notices. They were only given until the end of April 1940 to leave their homes.

The notices were given following the arrival of an Army officer in September 1939, after the outbreak of World War Two.

Across the top of the Epynt range (Image: Nathan Bevan)


Get the news you want straight to your inbox. Sign up for a Mirror newsletter here

He had been sent to scout the area for use as a training ground.

The Ministry of Defence decided that the region’s 30,000 acres suitable. Locals were told it was key to the war effort but that they would be compensated for their trouble.

Many thought the eviction would be temporary, believing their families would be able to return once the war was over.

Some even ploughed their fields in preparation for their return.

Following the eviction, one man regularly travelled back to his farm to light a fire in his hearth to prevent the stonework from falling foul to the elements.

He did this every day until he was informed by two soldiers that his home had been reduced to rubble.

One woman, aware of the finality of the situation, insisted on taking her front door with her when she left the community.

Iowerth Paete, the former curator at St Fagans Folk Museum (now known as the National Museum of History), was sent to Epynt to capture the clearance.

He saw horses pulling carts loaded with furniture heading away from the village and an old woman sat crying outside the home she was being forced to abandon.

Despite the deep sense of outrage, speaking up was seen as going against the war effort and the Allied forces’ battle against Hitler.

Epynt is now known as the Sennybridge Training Area, or SENTA, and it is one of the largest military training zones in the UK.

It is now largely barren, save for a ‘ghost village’ built in the Cilieni Valley in the 1980s and used by soldiers training to fight in built-up areas.