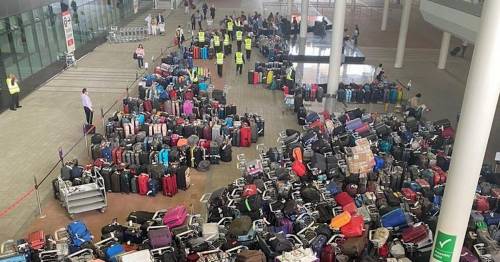 Passengers across the country have complained of mass disruption, with long queues outside terminals with many losing hundreds of pounds due to missed flights.

The disruption has been ongoing for several months, with the situation worsening due to the rise in demand sparked by the half-term school holiday and the four-day Platinum Jubilee weekend.

At Heathrow, a huge collection of abandoned bags were seen piled up in a baggage hall waiting to be collected.

The scene was recorded by Sky News defence and security correspondent Deborah Haynes as she left Heathrow's Terminal 2 after an early evening arrival from Brussels.

She said: "The warning signs that all was not well were clear at baggage claim.

Hundreds of cases pile up at Heathrow's Terminal

"There were clusters of suitcases without owners grouped around various conveyor belts.

It comes as the aviation industry is suffering from staff shortages after letting thousands of people go during the coronavirus pandemic.

London's Gatwick Airport said on Friday it is reducing the number of daily flights during its busy summer period to help tackle staffing issues.

EasyJet said it was "reviewing the details" of the cap but insisted it expected to be able to "reaccommodate the majority" of passengers should their flight be affected.

An airline spokesman said: "We are aware of the capacity cap announced by Gatwick Airport and are now reviewing the details to assess what this means for easyJet's Gatwick operation. We recognise the need for Gatwick Airport to do this, as airports across

Europe have visibility across all airlines and are well placed to decide what capacity is realistic in the current challenging operating environment so all airlines can provide reliable services for their customers.

"Given the high frequencies of our services to and from Gatwick, we expect to be able to reaccommodate the majority of customers should their flight be affected by the cap."

Nicole Venglovicova, 31, missed three separate flights to Belfast from Heathrow and is concerned she will not get a refund of approximately £500 she has spent trying to sort air travel.

"I had a meltdown, I was crying outside the airport out of stress," Ms Venglovicova, a freelance video producer from London, told the PA news agency.

"I arrived at the airport for my morning flight and Flybe told me the queue is huge so I need to run.

"When I finally got to security, my boarding pass didn't work… the gate was still open at this point."

As Ms Venglovicova went back to the front desk to explain the issues with her boarding pass, staff "started arguing with security".

By the time she was able to get back to her gate, it was closed and nobody was there.

Scenes of chaos at Heathrow terminal 2

"The problem I had was that they should have told me that I will miss my flight because of the queue and I would (have) immediately booked a later flight to go on.

"But instead they send me (back) to security check and make me miss my flight and I had to go through arrivals and look for my luggage which they didn't even put onto the airplane."

Retrieving her luggage and going back through security took Ms Venglovicova a further two hours which she meant she missed another two flights she could have caught to Belfast.

"I thought I (could get the) afternoon one and then I saw that the queue is going all the way outside to the car park and I couldn't see the end of it," she said.

"Then I had a meltdown and just went home.

"There is no point. Domestic flight to Belfast and I need to go to the airport when? Eight hours earlier?"

Mick Lyon, from Liverpool, said his time at Manchester Airport on Friday was "very frustrating".

Travelling home from Paris, the 39-year-old said passengers were queueing outside the terminal as passport control barriers were closed down.

"I travel for work and fly most weeks and Manchester Airport is certainly the worst experience at any airport," Mr Lyon said.

"Literally needed someone to open up the barriers so people could queue orderly… it could have easily been avoided by opening up the barriers," he added.

Pressure is mounting on airports and airlines to handle the influx of those going abroad on holiday.

Gatwick Airport is planning to limit its number of daily flights to 825 in July and 850 in August compared with a reported 900 daily flights during the same time period in previous years.

It comes after a busy Jubilee holiday week, which saw more than 150 flights being cancelled across the UK on the eve of the Jubilee.

Downing Street welcomed Gatwick reducing flights "so they can realistically deliver over the summer".

A No 10 spokesman said: "We want everybody to be able to travel freely and easily, which is why we continue to encourage industry to step up their recruitment so they can put enough flights for families who are looking forward to well-deserved holidays after the pandemic."

Business minister Paul Scully earlier suggested that one solution to airport chaos is for staff to work longer hours if they want to.

Travellers queue outside Bristol Airport at 4am
(

He told Sky News: "We want to work really closely with the airports and the airlines to make sure that they are doing everything they can and see what more we can do.

"There is a record number of vacancies – 1.3 million vacancies across the country in all manner of sectors – but there are also people who have recalibrated what they want to do when they were on furlough.

"We want to make sure that those people that are not necessarily working full time, through Universal Credit we can get them back in to work to be more productive, if that suits them, and obviously match them up with the sectors where there are those vacancies."

When asked whether this meant people working longer hours, he said: "I'm not talking about going out forcing people to do anything, but we just want to make sure that they're matched up properly so that it's just that those people who can work longer – that want to work longer – can do."

Previous : Kate Middleton and Prince William’s ‘lovely gesture’ as they lead royals at Ascot
Next : ALL parents who take children on holiday in termtime to be fined in new crackdown