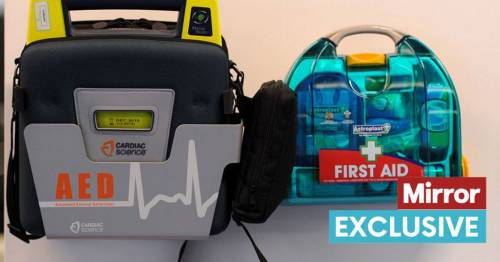 People living in England’s wealthiest areas have access to three times as many defibrillators as those living in the most deprived.

The shocking inequality between the rich and the poor has been exposed by a study of the 17,812 devices registered with ambulance trusts across England.

The figures also show England has fallen far behind the rest of Great Britain in terms of defibrillator provision.

Scotland has more than twice as many devices per person, while Wales has almost six times as many.

The Mirror is campaigning for a new law to be passed making Automated External Defibrillators (AED) a legal requirement in all public places.

We are calling for the Government to support MP Jim Shannon’s ‘Public Access to Automatic External Defibrillators’ bill when it receives its second reading on December 10.

A spokesman for leading AED supplier defibshop said: “In order to protect all our futures we need full support from the British government to reduce the number of deaths caused by out of hospital cardiac arrests.

“With legislation, advice, education and providing the means to save lives, we can work together to achieve this.

“Public access to defibrillators is essential in increasing the survival rate.”

The responses showed that in August this year a total of 27,150 defibrillators had been registered with the emergency services.

It is estimated there are up to 70,000 unregistered devices across the country but 999 call handlers can only direct members of the public to AEDs that have been registered.

Details of where each device is located were released on Thursday in the Cardiac Coverage Report, which was compiled by leading supplier defibshop.

The Mirror linked this data directly with Income Deprivation figures from the Office for National Statistics.

However, those living in the 50 most deprived areas had an average of just 20.92 defibrillators.

The data also revealed worrying regional variations in the numbers of defibrillators available to 999 call handlers.

England averages 31 AEDs, while Scotland has 68 and Wales a staggering 177.

The figures apply only to defibrillators which can be accessed by the public.

Since her death he has dedicated his career to raising CPR and defibrillator awareness and chairs the Save a Life Cymru campaign.

He said: “I’m very proud Wales has so many defibrillators but we are not going to sit on our laurels.

“There’s still more to do. The siting of defibrillators is paramount and people need to know where they are.”

The cardiac arrest suffered by Christian Eriksen during the Euros threw the issue of defibrillators back into the spotlight.

Days later the Mirror called for defibrillators to be made a legal requirement in all public places, including schools, sports grounds and public buildings.

France, which already has 46,000 AEDs registered, recently passed a law making defibrillators a legal requirement in almost all public places.

Campaigner Bruno Thomas-Lamotte told the Mirror: “It is now an obligation to have defibrillators, it’s perfect.

“In 2008 the survival rate for out of hospital cardiac arrests was under three per cent, now it’s seven per cent.

Many defibrillators installed by community groups or businesses are not registered with ambulance services.

The British Heart Foundation wants these ‘AED guardians’ to register their devices onto The Circuit, a national defibrillator network.

Judy O’Sullivan, from the BHF, said: “We believe there are currently tens of thousands of unregistered defibrillators across the UK, which means they are invisible to the ambulance services.

“It only takes 10 minutes for defibrillator owners or guardians to register their device online on The Circuit and 60 seconds later the data will be available in the live control room of the local ambulance service.

“To put it simply, knowing where the nearest defibrillator is could be the difference between life and death for someone.”

Anyone wanting to register their defibrillator should visit: thecircuit.uk ends.