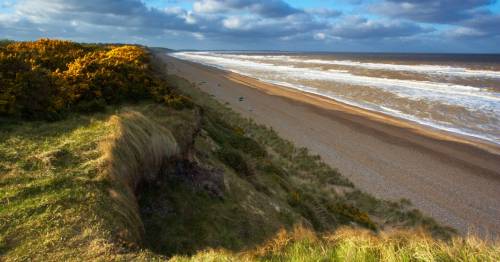 Dunwich, known as the lost city of England, has an amazing and interesting history.

Located on the Suffolk coast and surrounded by lots of beauty, it is hailed by some as Suffolk’s answer to Atlantis.

Dunwich was once a thriving medieval port, and shockingly, was on a par with London as the capital of the kingdom of East Anglia, with over 3,000 residents recorded as living there in 1086.

Sadly, the impact of storm surges and the resulting coastal erosion washed away much of the harbour buildings and land, meaning that it became much smaller and less significant as the years went by.

Research has been completed with sonar devices to map out underwater streets and buildings of Dunwich’s past.

England's Atlantis as city as big as London was swallowed by the waves CREDIT: Google

Professor David Sear, of the University of Southampton, said Dunwich was hit by huge storms on an annual basis.

Prof Sear told the BBC : "We use sound to create a video image of the seabed and the reason we do that is because when you dive at Dunwich it's pitch black.

"We found the ruins of about four churches and we've also found ruins of what we think was a toll house.

"But we've also found shipwrecks for example, and there's some we've found with this Touching the Tide project, which no-one's known before."

Many locals claim that during storms, you can hear the bells of lost churches ringing from below the waves.

The macabre folklore, ‘the dark heart of Dunwich’, tells of a local maiden with a broken heart who haunts the area around the beach searching for her lost love.

Circa 1910: The ruins of All Saints' Church at Dunwich on the Suffolk coast. Photo : Hulton Archive/Getty Images

Dr Francis Young, one of the foremost experts on the history and folklore of East Anglia, told the East Anglia Daily Times : "The Domesday Book of 1086 records a population of 3,000 people, and it probably peaked at around 6,000 people in the 12th century. For comparison, Bury St Edmunds had only reached 6,000 people by the 18th century.

"The town would have had all of the things that go on in a major port: fishing, merchants warehouses, shipbuilders, people who made ships tack — A place of this size would have had everything.

"The flood led to the commercial impetus behind the town going away, but the destruction of Dunwich was gradual, not overnight."

Knowledgeable staff are on hand at every turn to explain more about the underwater city.

A flooded field is pictured in Dunwich in Suffolk. Photo: Leon Neal/AFP via Getty Images

The museum spans the first millennium to the present day.

A detailed model shows what Dunwich was like at the height of its powers in the 13th Century, and the many exhibits cover Roman, Saxon, Medieval, Elizabethan, Jacobean Georgian and Victorian periods.

Locals and visitors alike can even sample some of The Suffolk Coast’s fine fayre at award winning coast and country pubs and inns – it may be a small place, but it sure is mighty.

Previous : 3 executive actions Biden could try to protect abortion rights
Next : Worst secondary schools in England as rated by Ofsted – see your child’s