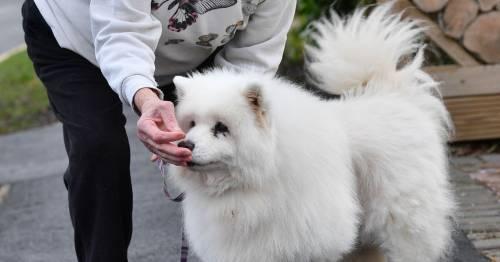 An elderly dog came close to death after swallowing a skewer while on a walk.

Mya the pooch was taken to the vets on October 27 due to concerns owner Mary Hickman had about her back.

Mya, a 12-year-old Samoyed-cross, already suffers from a dislocated hip however her new illness had nothing to do with her joints and was much more life-threatening, Surrey Live reported.

Vets immediately rushed Mya to the Queen Mother Hospital for Animals after discovering she had swallowed a 5cm skewer which caused a large abscess.

The Queen Mother Hospital is one of the largest and most advanced veterinary hospitals in the world, just north of M25 near Potters Bar in Hertfordshire.

The poor pooch needed to be taken to hospital for treatment
(

Mrs Hickman, from Redhill, Surrey, said: "It was such a shock when the vet found it because it had been hidden by her fur, it has been a real roller coaster."

Mya underwent surgery at the hospital where she developed surgery, requiring her to be admitted to intensive care.

She was placed in an oxygen kennel to recover.

Mya is now back at home and is due to have her bandages removed on Wednesday.

"If it had gone down the abdomen it could have caused a lot more damage, she has been very lucky. She's a tough little dog," Mrs Hickman continued:

Mya has returned back to normal and is enjoying her food, barking and looking forward to walks – even though they remain short to help recovery.

The family rescued Mya in July 2016 from Ireland where she worked as a breeding dog.

Mya had been brought over from Ireland to Surrey
(

Retired Mrs Hickman, who volunteers with Age Concern, used to take Mya into local care homes to visit residents before the outbreak of the coronavirus -1>coronavirus pandemic.

They're not sure when or where Mya ate the skewer, but they believe it was probably thrown on the ground and she picked it up on a walk.

Since the incident Mrs Hickman has spoken about the litter problems that face her local area in Redhill.

She said: "What really annoys me is that we don't use anything like the skewer she swallowed, she can only have picked it up on a walk.

"We've only been doing road walks over the past couple of years, and there's quite a lot of litter that has been left on the pavement."

Mrs Hickman further explained that although the litter problem hasn't gotten worse over the last few years, she believes it hasn't improved and wants something to be done.

She continued: "I used to litter pick and it would be back the next day. People are just so careless, even when there is a litter bin nearby.

"Stronger action must be taken against litter louts who do not think about the consequences of their thoughtlessness. The amount of litter in this area is a disgrace."

Previous : ‘I cracked a joke about our dead son… now my wife won’t speak to me’
Next : Woman claiming to be world’s oldest person born in 19th century dies aged 124 – World News