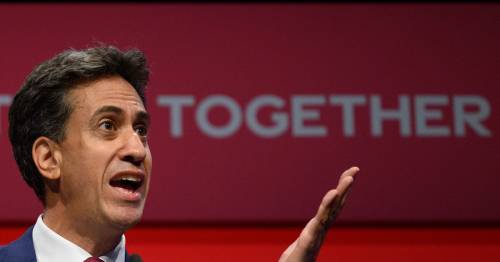 Ed Miliband today launched a furious attack on environmental protesters blocking roads and glueing themselves to the M25.

Speaking at a Green Alliance think-tank event, the former Labour leader told the Mirror: “I think it’s deeply counterproductive, some of what has been happening, I really do.

“Part of the task of peaceful protest is to win people to your cause, not alienate them.”
He compared Insulate Britain’s methods of bringing traffic to a halt on the London orbital motorway with the 2018 school strikes waged by Swedish teen eco-warrior Greta Thunberg and her supporters.

“One of the points I would make is the comparison with the pupil climate strikers,” he said.

“Some people will have said, ‘Should they really be off school?

“But it pricked people’s consciences, it drew attention to the issue, it super-powered government action, but it didn’t alienate huge swathes of people – and that is my real worry, honestly, about what Insulate Britain have been doing.”
He was speaking hours after motorists and Insulate Britain activists clashed in Essex.

A mother berated protesters for stopping her from driving her 11-year-old son to school.

Lorry drivers blasted their horns and a female protester was nearly run over by a frustrated motorist as the environmental campaign group blocked roads for a 13th time.

Insulate Britain protesters glued themselves to the highway at the slip road of the M25 in Thurrock, Essex
(

Multiple confrontations occurred at around 8.30am, with demonstrators dragged off the roads by drivers near a busy industrial estate in Thurrock.

The group has blocked parts of major roads around London, including the M25 and M4, to draw attention to climate change.

Mr Miliband said the “whole agenda of retrofit and insulation is a very important agenda” – and committed to Labour to borrowing money to make homes more environmentally-friendly.

“We have said we will borrow to invest,” he said.

Speaking before next month’s COP26 climate change summit in Glasgow, he warned the world would be watching Boris Johnson for leadership as top politicians descended on Scotland.

Calling on the Tory chief to have a “laser focus” on the talks, Mr Miliband added: “The role of a Prime Minister is really crucial in this – it is on him.

“It’s his reputation on the line, as well as the fate of all of us.”

Mr Miliband also urged the Government to issue banks with a deadline for setting out how they will help limit global temperature rises to 1.5 degree celsius.

"Government should ask all financial institutions not just to report on climate risks, as they plan to, but to bring forward by 2023 credible transition plans that are consistent with a 1.5 degree pathway,” said Mr Miliband.

“This would make a profound difference in the flow of finance out of fossil fuels and into green energy.

"We should ask all our FTSE 100 companies to do the same and have their own climate transition plans, consistent with 1.5 degrees, by 2023 – and furthermore, we should be asking in Glasgow that all major economies follow suit."

Mr Miliband also left the door open to slapping a windfall tax on energy firms, saying: “All options should be looked at during this period.”

It came as the PM’s COP26 spokeswoman Allegra Stratton told the Institute for Government think-tank the success of the climate summit would be judged on "getting to the end and feeling that 1.5 has been kept alive".