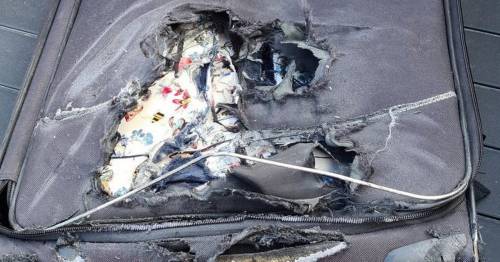 An easyJet passenger was left fuming when his luggage appeared on the conveyor belt ripped to shreds, with his belongings inside damaged beyond repair.

David Benjamin, 63, had flown back to the UK from France from a family wedding and was waiting for his luggage when the suitcase finally appeared at Gatwick Airport.

As he picked up the bag he realised the wheels had been damaged so checked the rest of it and found it was strewn open at the front.

The seasoned traveller, who has flown around the world for more than 30 years, said: “The only way I can describe it is imagine putting a drill through fabric – it looks as though it has been torn and crushed.

“We waited for quite a while in baggage reclaim before our bag came through on the conveyor belt upside down.

"I took it off, stood it on its wheels and then it fell over.

“I saw the wheels had been damaged which then brought my attention to the rest of it.

"They obviously knew it was damaged because of the delay and how they laid it carefully on the front to hide it.

“Everything got crushed. The shorts on the top got completely mangled.

The bag appeared on the conveyor belt upside down, which the passengers says was deliberate to hide the damage
(

"No conveyor belt can do this sort of damage, to me it looks it has been caused by some sort of vehicle."

The incident comes after months of nightmare trips for air passengers facing long delays and cancellations on hundreds of services.

When David tried to complain a member of staff for the airline told him to scan a QR code taking him to a form.

Since the incident last weekend he is yet to hear from any representative.

He added: “The most frustrating thing from an operational point of view is there was no one at the airport to report it to.

"I have tried calling them but no one picks up and the recorded message says not to leave a voicemail as the likelihood is it won't be replied to.

David had spent £400 on new clothes for the family wedding, which were ruined
(

“Everything is automated you can’t speak to anyone, if you email you can’t get a response.

“I messaged them saying I am travelling in 10 days and you just get a standard response saying ‘we will get in contact with you.’

"I even went to Twitter to reach out to EasyJet and they said to DM my information which I have done but have still not heard a response.

"I'm stuck in limbo and I don't know what to do.

“It is just frustrating, I don’t even know if they are going to replace the case.

"My insurers won't pay any claim on the contents until easyJet states in writing what they will and won't settle."