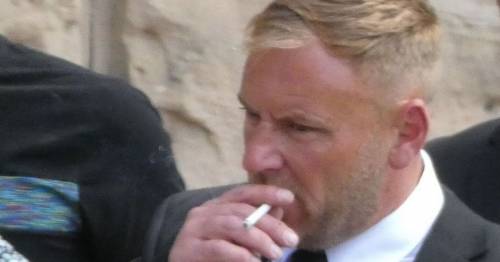 Drunk punter bought shots for man’s wife, stole his cigarettes then bit off his ear

A self-employed joiner bit a man’s earlobe off in “self-defence” after he triggered a pub brawl by buying drinks for his victim’s wife then walking off with his cigarettes.

Michael Williams appeared at Chester Crown Court on Wednesday to learn his fate over the outbreak of violence at The Halfway House in Runcorn on Friday, September 24 last year.

Anna Price, prosecuting, told how Williams had been drinking in the alehouse when at about 9pm he offered to buy drinks for another punter, Clare Hartley, whose husband Phillip had popped away from the table to use the toilet.

Williams brought four shots over: two each for himself and Mrs Hartley, and they drank them and he left.

The 38-year-old returned a short time later and goaded Mr Hartley, telling him to “cheer up and get a haircut”, the Liverpool Echo reports.

He attacked his victim in the pub
(

Williams, who Mr Hartley thought was trying to “chat up his wife", then “helped himself to some of his cigarettes and walked away”.

Mr Hartley followed him to the bar, with his wife and a friend behind.

The aggrieved husband “punched” Williams, prompting the friend and a bartender to try to separate them.

Williams retaliated by picking up a chair and he used it to try to hit Mr Hartley, who in turn grabbed him as they “ended up on the floor”.

Ms Price said: “While wrestling on the ground, the defendant bit his earlobe, causing it to tear off.”

Williams left and waited outside, and a few minutes later Mr Hartley appeared and threw another punch and dragged Williams against a wall where the tussle continued before Williams managed to punch his way free.

He appeared at Chester Crown Court
(

Mrs Hartley tried to “get involved” but was pulled away and Mr Hartley was dragged off the defendant.

Police attended and obtained CCTV of the brawl both inside and outside the premises.

Williams had drunk so much booze that he was still over the limit when he was caught driving a car to work the following day, leading to a conviction for excess alcohol.

Although medics were unable to re-attach Mr Hartley’s earlobe to the 3cm tear, they completed what Judge Simon Berkson described as an “impressive reconstruction”.

Williams suffered bruises, scratches and swelling during the brawl, classed as “minor injuries”.

When he was interviewed by officers from Cheshire Police, he said he couldn’t recall what happened but someone had told him he had taken some cigarettes, had “consumed a significant amount of alcohol” and had been “attacked”.

Williams had four convictions for four offences including a public order matter from 20 years ago and drink driving from the day after the ear bite.

He bit off his victim's ear
(

Williams, of Brookfield Avenue, Runcorn, pleaded guilty to one count of Section 20 wounding at Chester Crown Court on May 9 on the basis he acted in “excessive self-defence” for which he “apologises”.

Judge Berkson told Callum Ross, defending, he had read pre-sentence and GP reports and was struck by how Williams seemed to be “suffering from post traumatic stress disorder” as a result of the fight despite him being “the one who took the cigarettes and caused the problems that led to violence being used against him and him using violence against Mr Hartley”.

Mr Ross pleaded “strong personal mitigation” for his client’s guilty plea, his “genuine remorse”, “good character for 20 years” and “largely positive pre-sentence report”, which he said set out that Williams “can be rehabilitated”.

He noted the basis of plea of excessive self-defence, and said Williams was “punched first”.

Mr Ross added Williams was a self-employed joiner “contributing positively and productively to society” with a “lengthy and positive working history”, so much so a colleague was present in the public gallery in court to support him.

Mr Ross said Williams was subject to a lengthy driving ban and was the “main breadwinner” for his wife and two children, and had reduced his drinking to social events where his wife was present to “keep an eye on him”.

Judge Berkson sentenced Williams to nine months in prison, suspended for 18 months, with 200 hours of unpaid work, and orders to pay £500 in compensation to Mr Hartley plus £250 in prosecution costs, and surcharge.

There were tears in the public gallery as the sentence was delivered.

Judge Berkson told Williams: “You were so drunk in The Halfway House in Runcorn that the following day on the way to work in the morning you were significantly over the legal limit for driving a car.

“In that state in that pub the night before you decided to act in a way that was highly provocative to Phillip and Clare Hartley.

“Why you did that you can’t tell us as you have no real memory of events.

“It led to Mr and Mrs Hartley being upset about what you had done and they tried to talk to you and then you were attacked by Mr Hartley.

“Your response to that involved biting his ear so hard that you bit off a large part of the earlobe.”

With reference to Williams’s character references, Judge Berkson said: “It’s quite obvious this was out of character.”

No-one else was prosecuted over the fight.

Previous : Girl, 4, dies after parents leave her roasting in boiling 79C car to attend funeral – World News
Next : Man and woman charged with plotting to bring child to UK to harvest organs