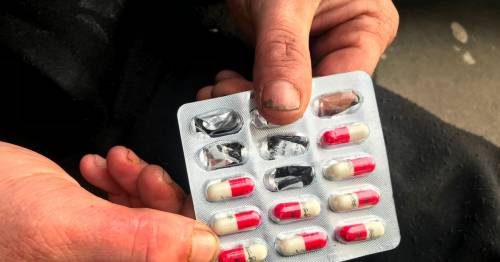 A prescription drug linked to a rapidly growing number of deaths in England and Wales is "absolutely rife" on the streets of Manchester, being sold for as little as 50p a tablet.

Pregabalin, normally used to treat nerve damage, epilepsy and anxiety, is being increasingly used among the city centre's rough sleepers and drug addicts.

Last year the drug was linked to 344 deaths in England and Wales – 60 of which were in the North West alone.

That's up from just one a decade earlier, figures from the Office for National Statistics show.

The abuse of the drug, and other prescription medications, cuts across society rather than being specific to homeless people.

However, during the pandemic, pregabalin's use among Manchester's homeless population has increased dramatically, Manchester Evening News reported.

During the pandemic, pregabalin's use among Manchester's homeless population has increased
(

This is because of a decline in the quality of heroin and the difficulty of begging or shoplifting during lockdown pushed addicts to seek cheaper alternatives, it has been claimed.

During the pandemic, heroin tested in Manchester has regularly been found to be below 10% purity, and on at least one occasion a batch was found to be just 2% pure, the Manchester Evening News understands.

Normally researchers would expect the levels to be between 20% and 40%.

It's understood much of the pregabalin supply in Manchester is coming from the Bury New Road area of Strangeways, where boxes of 60 tablets can be bought for as little as £35.

Michael Bradley, from charity On The Out, said pregabalin use was "absolutely rife" in Manchester.

But it's feared many of the pills are counterfeit, either imported from China or made in back street labs using unknown chemicals, which greatly increases the risk of harm.

Taken alone, the effects of pregabalin, a central nervous system depressant which was made a class C drug in 2019, have been compared to being drunk.

Prof Robert Ralphs, a lecturer in criminology and social policy at Manchester Metropolitan University and one of the authors of the GM Trends annual report into drug taking in Greater Manchester, said the increase in pregabalin use among rough sleepers was 'deeply concerning'.

He said: "It's been around for the last few years, but it's kicked in a lot more recently.

"That's because users have been pushed towards cheaper drugs like pregabalin because they've not been able to make as much money from begging or shoplifting during lockdown to buy their usual drugs.

"And it's also because the purity levels of drugs such as heroin are much lower at the moment.

"A lot of people will use pre-gabs on top of heroin, crack, spice or alcohol."

He said that this mixing increases the possibility of an overdose.

"It's a growing issue. Not just locally but nationally as well," he added.

They said: "Most of the Spice used to come from Chadderton, but the man got arrested.

"Since then there's still Spice, but it's not as strong as it used to be. Now most people are on the tablets from Bury New Road.

"It makes you feel like you're p*****. Loads of people are getting addicted to them."

Superintendent Helen Critchley, of GMP's Manchester division said the force has "a dedicated, multi-agency operation known as ‘Op Cranium’ in response to the sale of counterfeit medication."