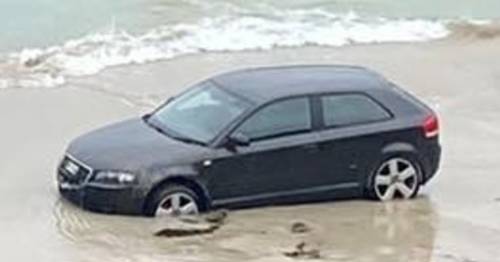 A driver ended up getting their Audi stuck on a beach after driving onto soft sand just metres away from the sea.

The motorist decided to park up in the cove at Port Stoth in the Isle of Lewis, in the Outer Hebrides, Scotland, yesterday so they could take in the incredible views.

But they must have instantly regretted the decision after realising the soft sand would be unable to hold the weight of their vehicle.

The tyres on the black car ended up sinking into the sand, just as the tide was starting to come in.

The driver and vehicle were rescued just in time by a local crofter who managed to drag it out to safety using a tractor.

The car on the beach

The vehicle began to sink into the soft sand

The HM Coastguard for Western Isles, Skye and Lochaber posted about the incident on Facebook yesterday.

They said: "The Outer Hebrides is renowned for its beautiful sandy beaches and bays.

"While most are safe and firm to walk on, sand is often soft and unable to support the weight of vehicles.

"The owner of this car which was stuck at Port Stoth in Ness was lucky that the tide didn't flood the car and a local crofter was able to remove it with a tractor before the next tide.

The beach has beautiful views

"We know the beaches are stunning so please help us to keep them that way by being safe and not risking your safety driving onto unstable sands."

The post has attracted over 600 likes and 370 shares on social media with many people quick to mock the driver's decision.

Floraidh Angela said: "Missing all the drama back home, lads unless you're doing the D-Day landing, don't try to drive your car on the beach."

Kevin Swanick said: "You're not supposed to park there."

Previous : Fake name Prince William used so that he could fly under the radar at university
Next : Man accused of smoking in Premier Inn room and fined £100 after HE complained of stench