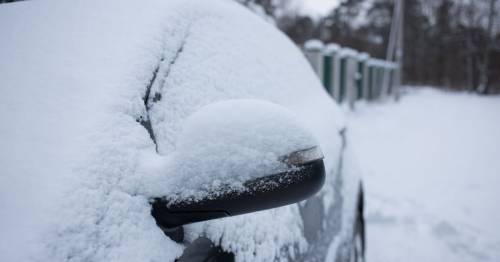 Drivers could face a £20 fine for leaving their car's engine running in the street – and it could double if it isn't paid on time.

Engine idling is illegal under Section 42 of the Road Traffic Act 1988, while The Highway Code says drivers should never leave their engines on for no reason, the Daily Express reported.

Andrew Marshall, marketing and partnerships manager at CarMoney said drivers were likely to idle their cars while defrosting their vehicle and urged road users to “cover” their windscreen overnight.

He added that a “can of de-icer and a manual scraper” is a better option than turning on their engines.

He said: “Now more than ever it is important to be aware of our impact on the environment.

“By minimising car idling on our daily commutes, school drop-offs and simply waiting in traffic, we can contribute less CO2 emissions.

“Aside from switching to electric vehicles or hybrid car models, motorists can be more mindful of their idling habits by switching off their engine if waiting for long periods of time.

“As winter approaches, lessen the need for idling whilst waiting for the windows to defrost by covering your windscreen overnight, or using a can of de-icer and a manual scraper to clear the windscreen.”

Meanwhile, the RAC warned idling engines can produce up to twice as many emissions as an engine in motion and said this would “impact the surrounding area and the air that we breathe”.

Car's side view mirror of a modern car covered with snow
(

But experts at Confused.com said the rules only apply on public roads, meaning motorists can legally idle their engine on their driveway without facing any punishment.

They said: “The rules over stationary idling apply to public roads only. So you aren’t breaking the law if you idle in your drive, or in a supermarket car park, for example.

“However, just because it’s not illegal doesn’t mean it’s the right thing to do. You’d be chucking just as many toxic fumes into the air regardless of whose land you’re on.”