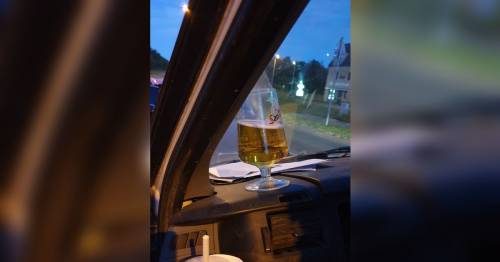 Stunned police pulled over man driving erratically who had a pint of San Miguel perched on his dashboard.

The reckless 31-year-old was 'too drunk' to take a breath-test on the roadside and was arrested on suspicion of drug and driving offences.

They stopped the van in Kirkby, Merseyside, at around 10.40pm on Monday, the Liverpool Echo reports.

Incredibly officers found a half-drunk pint of beer in a glass leaning up against the vehicle's windscreen.

After a search they soon also discovered he was in possession of cocaine.

The force shared a photo of the drink to warn others against attempting to sip booze while behind the wheel.

They confirmed the driver was "too drunk" to provide a breath analysis and was arrested at the scene.

The full post on Twitter said: "Any idea what made us stop this one? Driver was too drunk to provide and he's been arrested and is now in custody. Another selfish drink driver off the roads."

In an update today, a spokesperson for Merseyside Police said a man, from Bootle, has been arrested and remains in custody.

The full statement said: "Officers stopped a van in the Whitefield Drive area of Kirkby at around 10.40pm last night.

"A 31 year-old man from Bootle was arrested on suspicion of failing to provide a specimen for analysis, failing to co-operate with a preliminary test, possession of a controlled drug of Class A (cocaine) and using a vehicle without third party insurance. He is currently in custody."

Previous : Your dog having random accidents at home could be a sign of illness, expert says
Next : Covid is ‘drain’ on NHS as hospitalisations rise by 30% in a week, SAGE scientist says