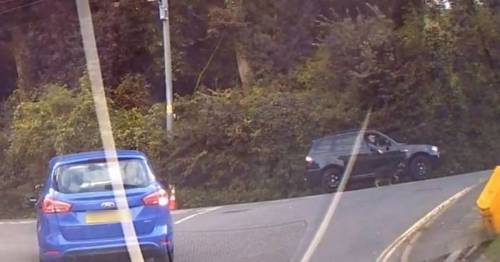 A driver left onlookers baffled as he appeared to be taking his dog for a walk by dangling the lead out of the window as he drove along.

The man looked relaxed as he headed through Plympton, near Plymouth, with the dog keeping up, reports PlymouthLive.

Other road users needed a double take though as they saw the dangerous antics with the dog in the middle of the road.

Dashcam footage was caught by Plymouth man Cody Hugill, who was driving towards the junction of Underwood Road in Plympton on Wednesday evening.

The video shows Cody driving up to the road and stopping as he sees the man walking the German Shepherd type breed, whilst behind the wheel.

In the footage, a man can be seen driving his car whilst holding the lead of his dog out of the window and going at a slow speed uphill for the animal to keep up.

The car carries on driving up the road and out of sight, with pedestrians and drivers in a state of confusion.

Shocked Cody told PlymouthLive: "It was a light night, and I had to do a bit of a double take if I'm honest.

"I was just travelling down the road and watching them, and even a couple of passersby turned their heads.

"Then as he drove up the road I wasn't able to follow him completely, but he'd gone on for a while at least."

It is not the only strange antics recently by pet owners that have left onlookers speechless, with an owl seen being taken for a walk in Glasgow.

A man was spotted casually strolling down a road holding an owl in footage that has gone viral with the bizarre video being likened to the Harry Potter films.

Footage showed the man walking in Paisley, Glasgow, with the owl perched on his hand and looking quite relaxed.

A video of the unusual outing was posted on Twitter by Kirsty Mitchell, 22, who saw the the pair from her car, reported the Daily Record.

The Twitter clip showed the man with the fine-looking owl heading down Glasgow Road.

Last month, the same man was spotted on a train from London to Edinburgh, leaving fellow passengers baffled as the bird perched on his shoulder.

Previous : The latest on the coronavirus outbreak for Oct. 14
Next : Covid infections rise in 82% of UK areas as daily cases soar – see full list