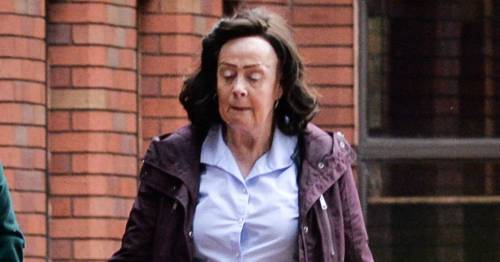 A drink-driving pensioner supped wine behind the wheel – after she was pulled over by police.

Elizabeth Mary Davies, 67, was spotted appearing unsteady on her feet at a car park in Glossop, Derbyshire, and police were called.

Stockport Magistrates' Court heard when they arrived she claimed she was okay and hadn't been drinking.

Prosecutor David Morgan said the officers took her word and let her drive off on July 22, Manchester Evening News reports.

He said: "They followed her for a short distance, and then she pulled over.

"She denied drinking, but then said she had had two glasses of wine.

The 67-year-old said she feels ashamed of herself
(

"She took a sip of a water bottle, which was in fact white wine."

A breathalyser test showed that Davies had 90 micrograms of alcohol in 100ml of breath – more than double the maximum of 35.

Davies, from Tameside, has a previous conviction for drink driving from 2012.

She represented herself at the short sentencing hearing and told chair of the bench Martin Drake she was 'ashamed'.

The pensioner has been banned from driving for three years
(

"I just feel so terrible and so ashamed of myself," she said.

"There’s not much more I can say, really."

Mr Drake told Davies he gave her full credit for her early guilty plea on August 23.

He sentenced her to a three-year ban, a 12-month community order and 70 hours of unpaid work.

Davies will have to undertake 20 rehabilitation day, pay £85 in costs and a £95 victim surcharge.