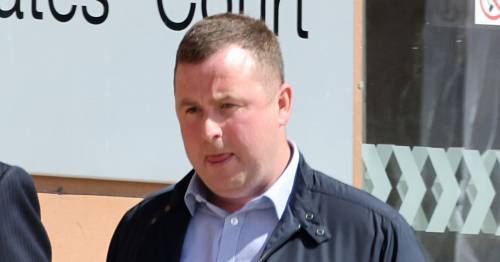 A drink driver was caught red handed after his own Mercedes called 999 following a crash.

Alan McShane was over the drink-drive limit as he drove home to Wallsend from a night out after Newcastle United’s win against Arsenal on May 16, reports Chronicle Live.

In a hearing at Newcastle Magistrates’ Court on Monday, McShane pleaded guilty to driving on New Bridge Street with a blood alcohol level of 110 microgrammes of alcohol per 100ml of breath – more than three times the legal limit of 35 microgrammes.

The 37-year-old had been driving a Mercedes EQC belonging to the company he works for, which called the emergency services after he crashed while coming off the Central Motorway, the court heard.

Prosecutor Sarah Malkinson said: “On the morning of Tuesday, May 17, officers were asked to attend the scene of a one-vehicle collision on the off-slip of the Central Motorway.

"A vehicle had collided with the surrounding street furniture.”

McShane was taken to the RVI for a check-up following the crash, where he fell asleep while being seen by medics
(

Arriving at the scene, she said they found paramedics and the fire service on scene, with McShane standing in the middle of them.

She added: “He identified himself to be the driver of the vehicle.

"The officer noticed the smell of alcohol and that the defendant was mumbling and therefore asked him to provide a sample of breath.”

McShane was taken to the RVI for a check-up following the crash, where he fell asleep while being seen by medics.

Mitigating on on behalf of McShane, Michael Henderson said he had no previous convictions and was “basically a hard-working man who, on the night in question, made a significant mistake”.

He said the qualified gas engineer worked as a senior manager for heating company which serves large organisations including Newcastle City Council.

He added that, due to a shortage of engineers, McShane had been working hard and prior to the incident “could not remember the last time he had a day off”, and had not been intending to get drunk that evening.

He said: “He went to work on Monday morning, he worked throughout the day, it’s the old story of nothing to eat, very little to drink, and the plan of action was to go into town, have a meal, watch the game on television and go home.

“He drove into town in a company Mercedes vehicle, he wasn’t concerned when he parked because he was going to drive it home…

“The people he met didn’t want to go for food, so he had a drink, and in the early hours of the morning he knew he had to drive the car to work, he was concerned about leaving it parked there because it wasn’t his vehicle.

"He made a mistake – ‘15 minutes to drive home to Wallsend’, that’s what he thought, ‘I will get the car’. Obviously his judgment had been affected by the alcohol he had consumed.”

He said the collision happened after McShane had clipped the kerb and then airbags in the car had triggered.

Mr Henderson added: “[T]he next thing was that there was a voice, part of the safety system, saying ‘we’ve called emergency services, are you alright?’

"He didn’t know what was going on…Paramedics turned up, I think they must have been called by the system.”

He said McShane had immediately admitted to being the driver of the car when police arrived.

He said he was sorry for his actions and had ‘learnt a hard lesson’.

He was also banned from driving for 25 months, with the option to reduce the ban by 25 weeks by taking a drink drive rehabilitation course.

Chair of magistrates Stephen Cape told him: “We’ve decided against involving probation at this stage because we’re taking into account your early guilty plea, the fact that you have no previous convictions and that you show remorse.

"That is set against the [alcohol] reading which is in the middle of the band and also to some extent the accident, it didn’t involve anybody else but you bumped against the kerb.”

Previous : ‘I’m in love with a murderer jailed for 40 years – he is all I’ve ever wanted in a man’
Next : University sex attacks reported ‘every 12 hours’ with 2,000 abuse claims in 3 years