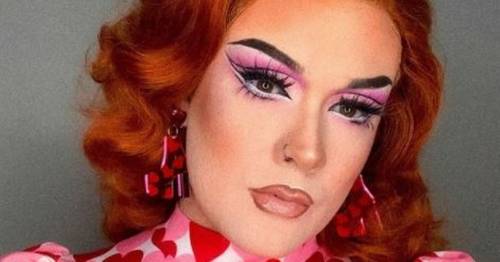 A drag queen is afraid to walk alone in Birmingham’s Gay Village after they were hit with 'urine' thrown from a car window.

Matt Williams, who goes by the stage name Dahliah Rivers, was dressed in full drag and thinks they may have been the target of a homophobic hate crime – one of several recorded in the city in recent weeks.

The 26-year-old was outside The Nightingale Club at about 2.30am on August 6 when he was doused by liquid thrown by a man out of a car window.

Despite reporting the incident to West Midlands Police and receiving a crime reference number, Dahliah says they've had no contact from the force for more than two months.

The details of the incident have been revealed amid a spate of suspected homophobic hate crimes in the city.

Another victim, John-Paul Kesseler, was struck with a wine bottle and an iron bar, while Matt Brooks was punched in the face with such force he needed emergency surgery on a fractured eye socket to relieve pressure on his eyeball.

Dahliah said the area was “notorious” for having carloads of people driving down the road hurling abuse – something they said police were aware of.

"I have to get people now to walk me down to The Village, which is where I get changed. I don't feel safe even walking down one street."

Recalling the disgusting attack over the summer, Dahliah said: "I was about to cross the road outside the club to get my taxi and this car dived past me and my partner at the time.

"They came out of nowhere. It happened quickly and they shouted something at us. Liquid was thrown at us by someone in the car out of the back window.

"It landed in my face. My lashes fell off and my wig was soaked. It was tingling on my skin. I did think it was urine at first, but I'm not sure. It was the sheer shock of it all.

"I was in no fit state to go back (to work) straight away and entertain people and pretend I'm OK when I wasn't.

"Luckily, I've had people to fall back on if I do feel anxious.”

Security was typically “great” at the Nightingale Club, with staffers usually calling in backup if they spotted a car that looked dodgy.

CCTV footage captured the attack and has been passed to police. But no progress on the case appears to have been passed onto the victim.

Dahliah, who has been performing drag for four years, said: "I was tempted to not even report it because I felt things just don't get followed up. But it was my partner who said: 'No we should'.

"It's disappointing. Nothing has happened. The only time we spoke to police was when it happened and the next day they called us saying they were looking into it and gave us a crime reference number and that was it.

"The only updates I've had are from the Southside BID's Twitter page. They've given police CCTV footage, but we haven't heard back."

A West Midlands Police spokesman described the case as a “really unpleasant incident” in which a liquid, thought to be urine, was thrown at the victim.

"We understand the impact this kind of assault can have on victims and the wider community,” he said.

"We’re sorry that due to a high volume of cases our teams are working through, including some very nasty assaults and woundings, we’ve not yet been able to progress this investigation.

"We will make contact with the victim as soon as possible.

"We run operations across weekends into the early hours with high-visibility and plain clothes patrols, plus regular passing attention paid by police vehicles.

“Everyone should feel safe and comfortable to be who they are, we will not tolerate people being targeted in this way.”

Police have stepped up patrols in the Gay Village as homophobic attacks soar, officers said yesterday.

"People feel they can do this. Unfortunately that person is still waiting to be contacted by West Midlands Police.”
Mr Barton said he was “very worried and concerned” about instances of homophobia and homophobic attacks.

"Unfortunately there has been a national increase with these type of incidents,” he said. “Police are not responsible for how people behave within society, but how they respond to those situations is very important. That's how they will be measured by.

"The issue of homophobia, attacks and criminality only becomes a topic of conversation when things go wrong.

"We only end up having a discussion about it when unfortunately people are either verbally abused or they are physically attacked.

"Homophobia and all different types of phobia exist in our society. There's issues of education, social exclusion and the issue that people aren't talking about it."