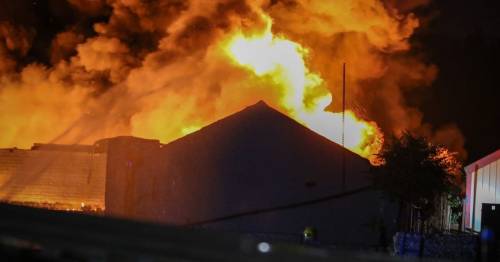 Dozens of firefighters are tackling a huge blaze in an area of Manchester that has brought nearby trains to a standstill.

Images on social media showed vast plumes of smoke billowing from the scene of a commercial premises north east of the city centre.

Eight fire engines are currently at the scene as emergency services battle the raging inferno.

In a statement Greater Manchester Fire and Rescue Service [GMFRS] said: "At around 10.40pm on Wednesday 21 July, GMFRS crews were called to reports of a large fire at a commercial premises on Oldham Road, Manchester.

"Eight fire engines and other specialist appliances are currently at the scene. Firefighters are working hard in very warm conditions to tackle the blaze in sectors using jets, an aerial platform and a ground monitor, and to prevent spread to adjacent buildings.

Officials have advised people to avoid the area

"Road closures are in place. Local residents are advised to keep their windows and doors closed and should avoid the area while firefighters carry out their work."

Northern Railway issued a warning of widespread disruption to train services with the line shut due to the fire.

The body said on Twitter : "Due to a large fire in the Miles Platting area of Manchester many of our late services are cancelled. We're working with colleagues to plan for early morning services, but widespread disruption is likely.

Plumes of smoke were captured billowing over the skyline
(

"Many of our trains are displaced as a result of the line closure and may not be in the correct place to operate services in the morning. Disruption is possible on all routes in and around Manchester, but we'll be working through the night to provide the best service possible."

Shortly before 1.30am Transport for Greater Manchester confirmed the rail lines had been re-opened but road closures remained in place.

They added: "Please avoid this area or take alternative routes where possible."

The inferno could be seen across the city
(

The blaze comes amid sizzling temperatures across the country, with the mercury soaring to a blistering 30C in many areas.

The city is forecast to bake again on Thursday with predictions from the Met Office of temperatures again reaching 30C with thunder predicted for the afternoon.