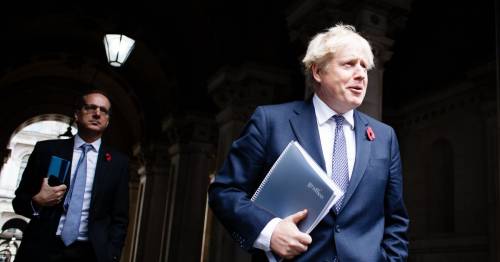 One of Boris Johnson's top aides who invited more than 100 people to a lockdown drinks party remains in his job, Downing Street has said.

No 10 was plunged into fresh chaos when fresh allegations emerged that a drinks party was held in the Downing Street garden on May 20 2020.

A leaked email from Mr Reynolds to staff, published by ITV, said: "Hi all, after what has been an incredibly busy period we thought it would be nice to make the most of the lovely weather and have some socially distanced drinks in the No 10 garden this evening.

Multiple reports have said Mr Johnson and his wife Carrie also attended the event, which took place when outdoor gatherings were banned under Covid rules.

Asked if Mr Johnson followed Covid rules at all times, the PM's official spokesman said: “I don’t have anything to add beyond that the Prime Minister’s made that clear previously.

"I just point you to his previous words.”

Asked what the Prime Minister was doing rather than responding himself, the PM's spokesman said: "I don't have the full diary in front of me at the moment but it's not uncommon, obviously, for Government ministers to answer these sorts of questions."

Mr Ellis said he had appeared before Parliament to discuss other allegations of parites, saying: "As I did then, I apologise again unreservedly for the upset that these allegations have caused."

He repeated an investigation is taking place and confirmed allegations relating to other gatherings on May 15 and May 2020 are part of this work.

Mr Ellis went on: "It will establish the facts and if wrongdoing is established there will be requisite disciplinary action taken.

"As with all internal investigations, if evidence emerges of what was a potentially criminal offence the matter would be referred to the Metropolitan Police and the Cabinet Office's work may be paused."

Mr Ellis said it "would not be appropriate" for him to comment on an ongoing investigation.