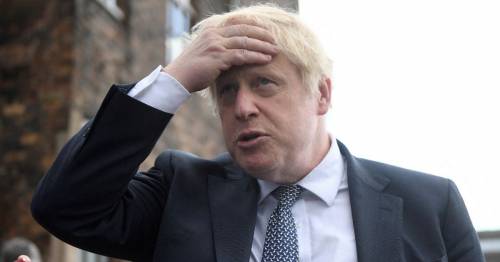 Boris Johnson ’s boast that the Tories are the party of law and order was in tatters tonight as a further flurry of lockdown-breach fines landed at Downing Street.

The Metropolitan Police announced today it had referred a further 50 fixed penalty notices for events in No 10 and Whitehall, bringing the total to a record 100 with more still expected.

It sparked claims Downing Street was the biggest Covid law-breaking address in the country.

The PM, already fined over his own birthday bash – along with Chancellor Rishi Sunak – did not receive an FPN in the latest batch, issued for a Christmas party on December 18, 2020, as he did not attend.

But junior staff are said to be furious at carrying the can for Partygate and are preparing to wreak revenge on Mr Johnson by revealing all at the Covid inquiry next year.

“They have racked up the dubious distinction of receiving more fines on the Prime Minister’s watch than any other location. Boris Johnson made the rules and then broke them at ­record-breaking scale.”

Commons standards committee chair Chris Bryant described No 10 as “the most lawbreaking workplace in Britain by a country mile”.

Mr Johnson’s former aide Dominic Cummings today claimed staff at No10 are plotting a ­“nightmarish” revenge on the PM after believing they have been hung out to dry.

He tweeted: “Tory MPs haven’t twigged: PM throwing all these junior staff under bus to cops makes his life nightmarish in Covid inquiry. Am getting lots of texts like, ‘’I can’t WAIT for the inquiry, I took notes.’”

Scotland Yard said: “As of Thursday 12 May, the ­investigation into breaches of Covid-19 regulations in Whitehall and Downing Street, has made more than 100 referrals for fixed penalty notices to the Criminal Records Office.

“These have continued to be made throughout the period since our last update on Tuesday 12 April, the investigation remains live.”

Mr Johnson, who has refused to quit over his fine, insisted during a trip to Stoke today he was “sure we’ll have plenty to say about that when the thing’s finished”. His allies expect him to receive more FPNs.

Mr Johnson is believed to have attended six events.

Up until February, there were 118,978 lockdown fines in England and Wales.

The scope of the public inquiry was widened yesterday but will still not include the Partygate scandal.

It is to examine the impact of the Covid pandemic on mental health and on children and young people.