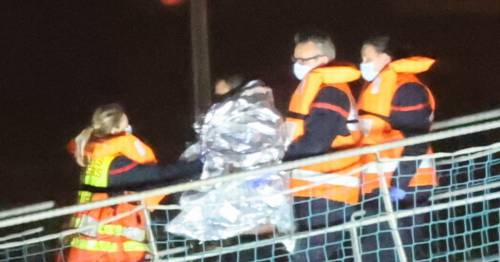 The doomed dinghy which capsized sending at least 27 people to their deaths was like a pool you'd blow up in a garden, a French official says.

The 'very frail' vessel got into trouble on Wednesday while its passengers were trying to cross the English Channel from France to the UK.

According to reports five women and a girl were among the victims in the tragedy that has been called the deadliest incident of its kind ever.

The French government's official toll initially stood at 31, but was later revised to 27.

Describing the victims' vessel French interior minister Gerald Darmanin said it was 'very frail' and added it was 'like a pool you blow up in your garden.'

Two suspected people smugglers are currently in custody in Calais after they were arrested north of Dunkirk, according to French daily newspaper Liberation.

The Dunkirk prosecutor's office has opened an investigation for "assistance with entry to illegal residence in an organised group" and "aggravated manslaughter".

Fishermen said that more migrants had left France's northern shores than usual to take advantage of calm sea conditions, although the water was bitterly cold.

A British skipper said he had overheard the incident on his boat's radio as it unfolded.

The Mail Online reports that Matt Cocker, of Dover, said: "The scenes must have been desperate. Awful. Picking bodies out of the water for anyone is the end of things and you don't want to be doing it."

He said it was likely the dinghy had been a 'cheap and flimsy' one which simply gave way.

He added that the sea had been 'absolutely flat' and said: "The traffickers put them in cheap plastic inflatables. They're not proper boats. They overload them and they split and deflate and the people end up in the water. They often don't have life jackets. They don't stand a chance."

Prime Minister Boris Johnson said he was "shocked and appalled" by the deaths and called on France to do more to deter people from attempting the crossing.

People trafficking gangs were "literally getting away with murder", he said.

President Emmanuel Macron said Britain needed to stop politicising the issue for domestic gain, while his interior minister, Gerald Darmanin, said Britain too had to be a part of the answer.

France had earlier stated 31 people lost their lives, but the number was later revised down to 27, government officials said.

Previous : 1 in 10 families set to ask for help this winter as cost of living crisis hits
Next : Princess Diana was first to stray during marriage to Charles, claims former aide