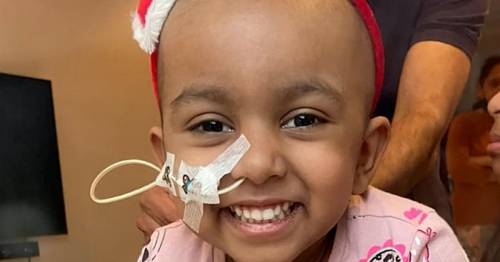 Donor found for girl, 4, who was given weeks to live after bruise turned out to be cancer

A family are overjoyed after their four-year-old daughter who was given just three weeks to live has found a stem cell donor who could save her life.

Esha Nadeswaran, 4, from Gants Hill, east London, was given weeks to live after a bruise on her leg turned out to be acute myeloid leukaemia (AML).

After the tumour was found on May 13, she spent 15 weeks at Great Ormond Street Hospital, where she underwent two cycles of intensive chemotherapy.

At the start of September, the family were told the treatment hadn't worked and that Esha had three weeks to find a stem cell donor with matching genetics.

Doctors told Esha's family that two cycles of intensive chemotherapy had not destroyed the cancer, and that she had three weeks to find a donor
(

Mum Kavitha, dad Rishya, big sister Ria and aunt Lavanya reached out to the South Asian community – who list low on donor registers – to help their little girl live through the life-threatening disease.

Twelve days into Esha's three remaining weeks, the family posted a joyous update – that a matching Sri Lankan donor had come forward to save the four-year-old.

On Instagram, the family said: "We have some positive news to share with you! A matching donor has been found for Esha.

"We are yet to learn more details about this development, but we wanted to immediately share this news with all of you who have made this possible for us.

A post from Esha's family says although a donor has been found, there are a number of factors that could stop a transplant in its tracks
(

"Your continuous show of support and love, in addition to those who have since registered to become a stem cell donor, has been one of the main driving forces for us as a family.

"You have enabled us to push hard every single day for the last 12 days since we found out the devastating news.'#

"The procedure will involve doctors giving Esha new stem cells through her bloodstream, which it is hoped will grow to form healthy red blood cells, white blood cells and platelets to send her AML into remission.

Despite the donor being found, the family issued another post, warning that just because a donor was found – there are a number of factors they must meet before the transplant is confirmed.

"Despite a donor being found… There are still so many uncertainties.

"The donor may not be a high % match.

"Tests need to be done on the donor to see if they're healthy enough.

"We urge people to come to the donor drives."

Esha lives with mum Kavitha, Dad Rish and her big sister in Redbridge
(

The family say they will continue their campaign until September 20, in the hopes of finding a donor with a closer genetic match to the youngster.

Esha still has a "long journey" and several "high risk procedures" to face before being in remission.

The family's Instagram post continued: "Despite finding a match for Esha, we as a family will continue to campaign until Monday 20th September as initially planned and will be adding more events to our current roster.

"We are praying that with everyone's help, Esha can get through to the other side and be back home with her loved ones leading a normal life one day in the near future.

"We as a family have received an overwhelming number of messages from people who have followed Esha's journey due to an unexplainable connection they have formed with her from what they have seen or experienced online.

"Consequently, we shall be continuing to document and walk you through the next few months of Esha's progress.

"We believe it is extremely important that all of you who have shown Esha love and support are equally as part of the journey as us, Esha's family.

"We ask and pray that you continue to support & share the message of Esha's journey to help us bring Esha home! Thank you.'

If the donor is not healthy or suitable for the transplant, the family will be back to square one – and have urged South Asians to show up for donor drives

In other cases, several matches have been needed to ensure a transplant that will hold.

"One is not enough", the family said, while urging South Asians to head to the donor drive to see if they are a match for the youngster.

'One is simply not enough. This is why, as a family, we still urge you to come to our swab test drop-ins.

This is just one small step towards the right direction ,however we still need your help!

Thank you to everyone who has supported us and who continue to support us on this journey.'

Esha's aunt, Meera Visakan, previously said: "This has been so heart-breaking for the family.

"It all just happened so quickly. Esha said she was tired, lost her appetite and developed bruising on her leg. But then a series of blood tests confirmed the devastating news.

"Your world is turned upside down, you can't sleep, eat or breath really.

"I can't emphasise enough our plea to the public to sign up to be a stem cell donor to save her life or even a child in a similar situation. If we don't there are no other treatments available [for Esha].

"The process is easier than doing a Covid test."

None of Esha's immediate family members were a match
(

Stem cells can grow into any other cell in your body and this means they can be used to treat a wide range of blood cancers and disorders.

For some people, a stem cell transplant is the only hope of survival but 65 to 75% of those in need (around 400 UK patients) are unable to find a sibling match so rely on the generosity of strangers.

As Esha's sister Ria, nine, and their parents are not a stem cell match this is the case.

Meera spoke about how heart-breaking it has been to see such Esha go through this.

She said: "Esha is funny, bubbly and cheeky. She loves Disney princess movies – especially Princess Jasmine at the moment.

"She even mustered up the energy to give a thank you message to everyone in the hospital.

"We just want to see that smile again."

The family has been inundated with support so far.

"When it happens to you and your own family, you see the support of strangers and the kindness of people," Meera said.

Esha's story has been shared by comedian Romesh Ranganathan and the family say the team at Great Ormond Street Hospital have been hugely supportive – including painting Esha' nails and dancing and singing at any opportunity.

To register as a donor, you must order a swab kit online, swabbing your cheeks and returning the kit.

You will then be added to the register and your sample analysed to determine your patch for a patient.

Previous : Feds: Los Angeles bomb technicians caused major explosion
Next : Man charged with murdering his wife 20 years ago after being extradited from Pakistan